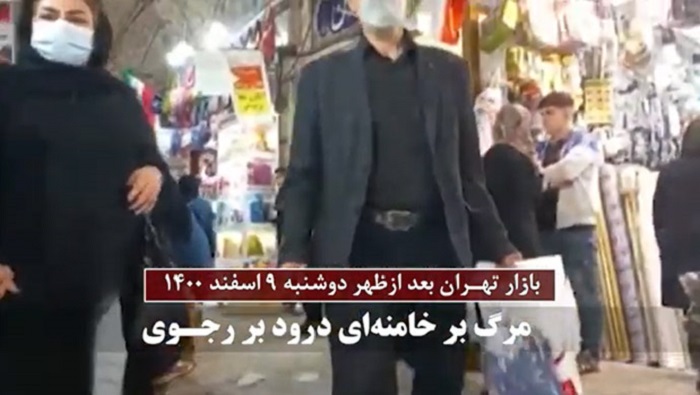 Members of Resistance Units, an Iranian opposition network associated to the People’s Mojahedin of Iran (PMOI / MEK Iran), are releasing more anti-regime audiotapes in Tehran and Mashhad, according to reports and video evidence from within Iran.

Anti-regime chants were heard in the crowded vicinity of Tehran’s Rudaki Street at 7 p.m. local time. The following were some of the slogans:

“Raisi is the executioner of 1988!” says a protester, referring to regime President Ebrahim Raisi’s direct involvement in the slaughter of over 30,000 political detainees in 1988, most of whom were MEK members and sympathizers.

“The days of the mullahs are numbered!” “The mullahs’ days are numbered, neither crown nor turban!” stressing the Iranian people’s demand for a free, democratic, and non-nuclear republic in Iran, alluding to the Iranian people’s antagonism to dictatorships such as the Shah’s, which was overthrown during the anti-monarchical revolution of 1979, and the current mullahs’ rule.

On Mashhad’s iconic 17th Shahrivar Street, at 8 p.m. local time, fragments of a speech delivered by Iranian Resistance leader Massoud Rajavi and anti-regime shouts were played. Moreover, on February 19, people at Tehran’s Tajrish Bazaar heard similar anti-regime chanting. Finally, on February 11, the anniversary of Iran’s 1979 Revolution, anti-regime slogans were aired over the loudspeakers of a Saderat Bank branch in Shahriar, west of Tehran.

At the time, locals thought the market’s computer system had been hacked. The incident occurred mere weeks after the regime’s state-run broadcasting infrastructure was disrupted, resulting in photos of Iranian Resistance leaders being broadcast on state television.