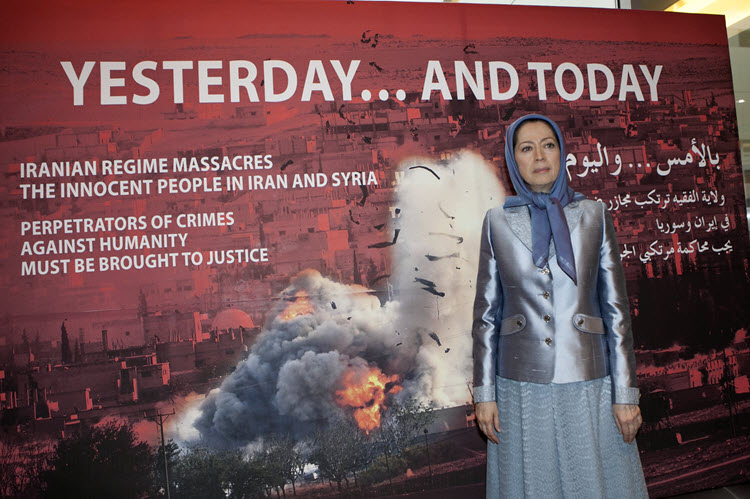 Heshmat Alavi wrote an article for the American Thinker in which he calls for the appeasement towards Iran, which has lasted for decades, to end. He said that the West, in particular the United States, has to seriously rethink its policy if Daesh is to be eliminated. On 26th November, at a conference in Paris, Mrs. Rajavi, the President-elect of the National Council of Resistance of Iran (NCRI), said that the first step is to end Iran’s role in Syria.

The conference “Call for Justice: Ending Impunity for Perpetrators of Crimes Against Humanity in Iran and Syria” was attended by a large number of political figures and jurists from Europe and the Middle East. There was also a delegate of Syrian opposition officials. Former Columbian presidential candidate Ingrid Betancourt spoke at the conference, as did Fatoumata Diarra, former International Criminal Court judge and Irish Senator David Norris.

Mrs. Rajavi said that the U.S. policy has been a disaster, not just for Iran, but also for other countries in the region. She said that the opposition and the Iranian people are expecting the new administration in the U.S. to change the policy that clearly does not work. One of the horrendous results of the policy is that half a million people have been killed in Syria and over half of the population has been displaced.

In Iran under President Hassan Rouhani, approximately 3,000 have been executed. Iran has meddled and caused devastation in Syria, Iraq, Yemen, and Lebanon.

Mrs. Rajavi highlighted that the Iranian people abhor the war that Iranian supreme leader Ali Khamenei is fuelling in Syria by sending troops to Syria and Iraq. Alavi said: “Under the banner of fighting Daesh, Iran has been specifically targeting the Sunnis of Iraq and Syria in lethal sectarian massacres.”

He believes that the way out of the Syria crisis is for the West, the United States in particular, to adopt a policy that will take no nonsense from Iran and it’s meddling across the region. “This will render a realistic platform to also take on Daesh, without the Iranian regime having any role in such a campaign, as sometimes weighed during the tenure of President Barack Obama.”

At the conference, many called for a firmer stance with regards to the Iran nuclear deal. They asked for Washington to stop letting Iran take advantage. The concessions made to Iran are unjustified given that the Iranian regime cannot abide by the most basic of human rights.

Alavi also mentioned the internal crises that are causing friction within the regime. Earlier this year an audio clip was released in which the late Ayatollah Hossein-Ali Montazeri was heard speaking to the people responsible for the decision-making during the 1988 massacre in which more than 30,000 political prisoners were killed. These people are still in power today.

Alavi said: “The international community should respect the thirst for freedom seen in all the nations of the Middle East. The new White House can begin by setting aside the failed appeasement policy and stand alongside those striving for democracy in this region.”