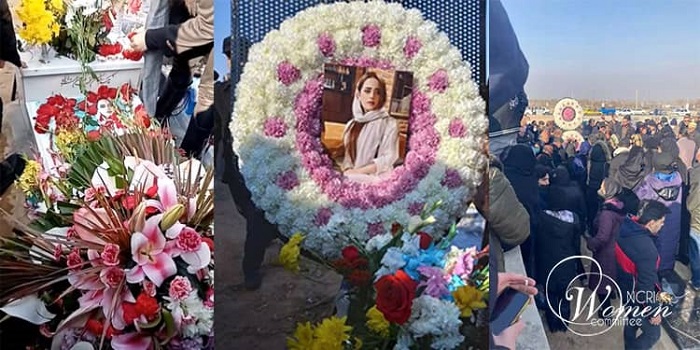 “That report, which the reporter of state TV and radio prepared in just two minutes,” he said. He served as both an interrogator and a judge. He voiced his opinion and cast his vote on his own. He brought shame to all of Aylar Haghi’s families. God will not forgive him, and he will be held accountable for his actions.”

Security forces used batons and tasers to arrest Aylar Haghi’s father and dozens of others.Aylar Haghi was a medical student at Tabriz University. On November 16, she was murdered during a crackdown on protesters in Tabriz on Day 63 of the Iran uprising.

According to early reports on social media, Aylar sought refuge in a building. The regime’s mercenaries tracked her down and pushed her off the roof of that building. A rebar pierced her abdomen and exited through her back.

Protesters killed, remembered on day 103 of the uprising

The people of Mahabad held the 40-day memorials for Azad Hosseinpour, Mohammad Ahmadi, and Kamal Ahmadpour on Tuesday. Bukan residents observed Hiva Jan-Jan.The mourners turned the 40-day memorials into large anti-regime rallies, chanting “This year Seyed Ali (Khamenei) shall be overthrown” and “Death to the supreme leader with so many years of crimes.”

As a result, only a small group of his family and friends could gather at his tomb to pay their respects. However, students at Tehran’s Melli University held a memorial service for Hamidreza Rouhi and Kian Pirfalak. In addition, at the Sadeghieh metro station, young people performed a song in memory of Hamidreza Rouhi.