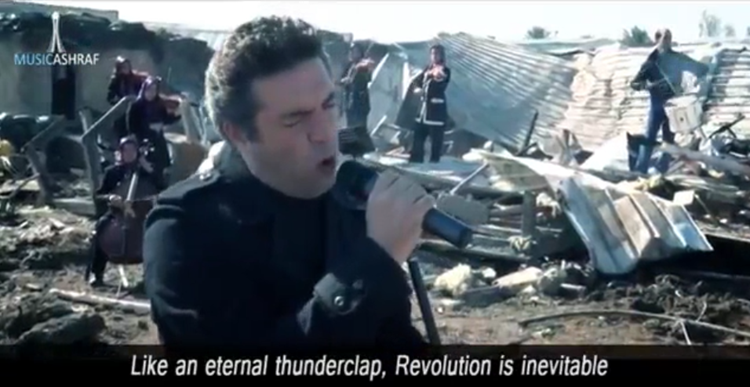 Circa TV reports that musicians at Camp Liberty, home to unarmed members of the People’s Mojahedin Organization of Iran (PMOI or MEK) in Iraq, responded to last October’s attack, when more than 20 Camp Liberty residents at Camp Ashraf were killed, in a unique manner.

A group of musicians calling themselves “Music Ashraf” responded with a music video they wrote, performed and produced.

“The moment I realized how horrific the missile barrage was and how many of my friends had been killed, I conceived the idea of writing and performing this song,” Rouzbeh Emadzadeh, the lead singer for the group, remembered.

Rouzbeh worked with other musicians, who had also experienced the attack, and had the same reaction, for 23 hours to create “Day of Reckoning.” They performed and recorded the song in the ruins left by the missiles. Rouzbeh recalled that they were cheered on by others searching the wreckage for their belongings.

Circa reports the Rouzbeh says that life at Camp Liberty is difficult, “Those who are supposed to protect us, the Iraqi security forces, are singularly focused on eliminating us.”

Further, Rouzbeh says in the report, “The Iraqi security services prevent fuel, vital for all power in the Camp and thus for survival in 110 degree Fahrenheit heat, from entering the camp,” He adds, “They also impede our access to medical treatment and bring agents of the Iranian Ministry of Intelligence and Security to the gates to threaten us. And, of course, the threat of another missile attack lingers, as was the case in July 2016 when another 50 missiles hit Liberty.”

International support helps the residents at Camp Liberty survive “so far, especially in Congress,” Rouzbeh said. The MEK and Maryam Rajavi, President-elect of the National Council of Resistance of Iran (NCRI), have worked hard to create that support, Rouzbeh pointed out.

“Harassment continues,” he said, “This regime, like other totalitarian regimes which oppress their own people, is doomed, I am confident that all the sacrifice has not been in vain.”