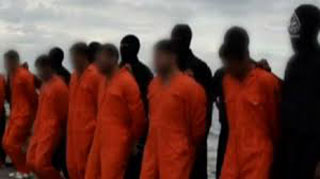 The Islamic State’s (IS or ISIS) lust for blood remains unsatisfied as it continues to subject innocent people to inhumane treatment under the pretext of religion. A series of incidents involving beheadings, immolation, rapes and murders has made it clear that the terrorist group’s depravity knows no bounds. The idea is to remain at the center of everyone’s attention and spread terror through mainstream and social media. Recent videos show that ISIS is investing in production and desperate to create a spectacle to ensure that it gets the coverage it deserves.

Most recently, it burnt to death a Jordanian pilot Lieutenant Muath al-Kaseasbeh and released the video inviting airstrikes from Jordan and condemnations from across the world.

Another video shows captured Kurds being paraded around in cages on the streets of Kirkuk. Now, there are reports that another 45 persons have been burnt alive in the captured town of al-Baghdadi in Iraq. The victims allegedly include members of the security forces and their families.

What is most worrying is that ISIS’s brutality is no more restricted to Iraq and Syria, but has also spread to Libya. 21 Coptic Christians, who had traveled to Libya to earn a living for their families back home in Egypt, were beheaded on a beach in Libya.

The highly produced five-minute video released by the group’s propaganda wing, shows a masked English-speaking militant who makes a speech before militants push the victims to the ground and behead them.

They had been kidnapped from Sirte in two separate incidents in December and January, and according to officials, all of them have been murdered.

The Iranian Resistance has strongly condemned the killings and offered condolences to bereaved families. The NCRI finds it unfortunate that all these atrocities are being committed in the name of a religion, which does not permit such acts against other human beings regardless of their faith or nationality. It is important to remember that the fundamentalism and the brutal tactics at display emerged in the region following the establishment of the theocracy in Tehran after the Iranian revolution.

Shiite militias that may not attract as much attention as ISIS but they are nonetheless equally and according to Kurdish officials more brutal. The regime serves a role model for terrorists who wish to establish a caliphate, which is essentially one man’s tyranny over the rest. But the destructive role of the Iranian regime is not in any way restricted to providing ideological and intellectual support to fundamentalism and terrorism.

The regime is meddling in Iraq, Syria, Yemen, Lebanon and other Arab countries, which has led to the emergence and subsequent expansion of terror groups such as ISIS. Bombing ISIS strongholds will have limited consequences if the regime is not evicted from Iraq, Syria and elsewhere. A strategy that solely focuses on militarily fighting ISIS while ignoring the Iranian regime’s interference in the region is akin to attempting to take water out of a flooded house without shutting the tap.