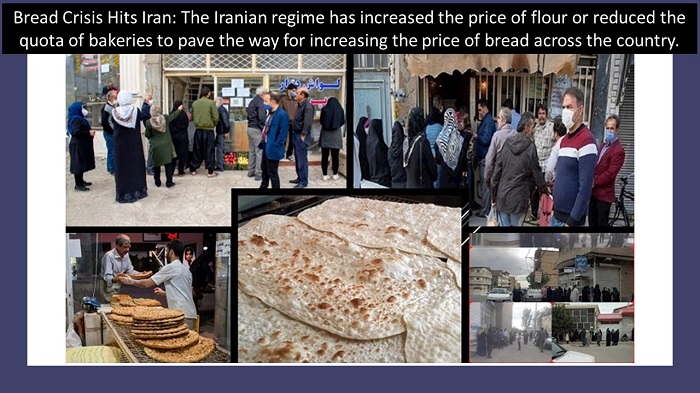 MEK supporters reported from many parts of Iran people are experiencing a shortage of bread and the consequent rise in its price to a point that ordinary citizens are suffering. Last week The National Council of Resistance of Iran’s (NCRI), and the People’s Mojahedin Organization of Iran (PMOI / MEK Iran), reported that the crisis is uneven as there is a shortage of flour in some cities, while in others, the price of bread has inexplicably risen by a factor of 30 to 50%. In some other cities, bakeries have closed because there is no flour to make bread.

#Iran: Prices of Bread, a Staple Food Item for Majority of #Iranians, See a Staggering Rise; Inflation and Shortage of Flour in Iranian Cities; Closure of Many Bakeries #IranProtestshttps://t.co/zMr88bAC7N

It seems that either the government is paralyzed with no idea of how to solve the problem, or it is part of the problem itself.

Some state-run media sites are speculating as to the cause of the bread crisis. The Javan Online daily, for example, said: “The problem of bread in Urmia has reached such a level that some people even sell ten tablets of it for 100,000 rials [$0.33] using the mobile software ‘Wall.’”

The President of the Traditional Bakers’ Union, Bijan Norouz Moghaddam, said that “we have written to all relevant officials regarding the increase in the price of bread to clarify the task of the bakers, but we are still undecided.”

The Iranian regime has increased the price of flour or reduced the quota of bakeries to pave the way for increasing the price of bread across the country.#Iran#Povertyhttps://t.co/SKZr4w9bWq

Reports from around the country by MEK supporters

There are many MEK supporters from different parts of Iran who recounted the bread crisis as it has hit ordinary Iranians.

In Sanandaj, someone tried to steal a loaf of bread from a baker and when the baker protested, the man told him he was an intelligence officer who could arrest him if he wanted to.

A baker stands up to men who are taking bread to sell in the free market and tells them that the bread belongs to the people.
"I'm an intelligence agent and I can take them," is the response he gets. They also break his cellphone.
Bread has become scarce in many #Iran cities. pic.twitter.com/ixkIRnEu1s

In Saqqez, Kurdistan, there is a lack of flour and the little bread that is made runs out quickly. Elsewhere in Saqqez, there has been a report of bread smuggling. A car carrying 1,000 loaves of bread was apprehended in Saqqez on its way to neighboring cities.

#NCRI and #MEK reported that the price of flour has been increased at the same time that bakeries quotas have been reduced, which means that bread prices will soar, so #Iran people have been waiting in long lines during a pandemic to buy basic foodstuffs.https://t.co/sKytzcWTSK

In Miandoab, a resident of the city said that there was no flour and therefore no bread.

The bread crisis seems to have started in Urmia and Tabriz and, like the pandemic, spread to other cities quickly, reported by MEK networks in the area.

The regime, meanwhile, is wondering what all the fuss is all about.  They maintain that there is plenty of flour in the country. The CEO of the State Trading Company, for instance, says: “We have no problem in preparing flour and bread, while the amount of strategic reserves in the country is also unique!”

The most likely cause of the bread crisis seems to be that the regime itself is profiteering from the distribution and sale of flour. By reducing the amount of flour available to bakers, they have to find the flour they need on the open market. This inevitably puts the price of flour up and this means that the price of bread rises too. Hoarding and smuggling and increases in the cost of transportation just make a bad situation worse.

Urmia, SW #Iran
Locals wait in long lines for "lavash" bread. Instead of solving the problem, the head of the city's Baker Unions blamed the lack of bread on locals/said they were buying a month's worth of bread and storing it for later use.

The government doesn’t seem to want to resolve the bead crisis which is making it very difficult for ordinary Iranians to buy the bread they need to avoid starving.

In addition to the rise in the price of bread or its unavailability, the subsidy has been reduced to less than $1.50. An unemployed person who is just trying to look after his family can only afford 150 pieces of Lavash bread per month. A family of four must survive on $6 a month.