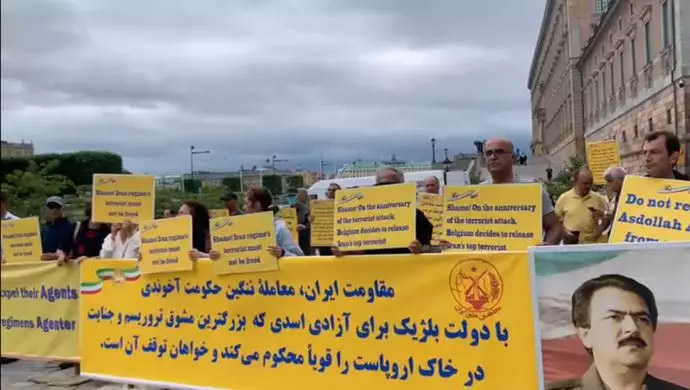 According to the official website of the Belgian Parliament, the Belgian government is on the cusp of finalizing a shameful agreement with the mullahs’ regime ruling Iran. Under the pretext of “Transfer of Sentenced Prisoners,” Brussels will return Assadollah Assadi, a career diplomat terrorist, to Tehran. Assadi was the mastermind of a failed bombing plot against a large Iranian Resistance event in France in 2018, attended by 100,000 people, including hundreds of lawmakers, current and former officials, and dignitaries from five continents.

According to the bill, convicted criminals from two countries can serve their sentences in their country of origin. It doesn’t take a rocket scientist to figure out that Assadi, who received his orders from the highest authorities in Tehran, will not spend a single day in prison if he is returned to Iran.

A Court of Antwerp had sentenced Assadi to 20 years in prison, and his accomplices, Nasimeh Naami, Amir Saadouni, and Mehrdad Arefani to 18, 18, and 17 years in prison respectively, revoking their passports and Belgian citizenship.

The Iranian Resistance and Iranian ex-pats strongly condemned this shameful deal, which will only encourage the regime to further increase its terrorist activities in Europe and ratchet up its policy of holding dual national hostages and using them as bargaining chips.

Mrs. Maryam Rajavi, the President-elect of the National Council of Resistance of Iran, called on all Iranians, lawyers, political figures, representatives of the Belgian Parliament, the European Parliament, and other European parliaments to take immediate action to prevent the approval of this bill. She added that if this bill is approved, religious fascism will be encouraged to exploit the granted impunity to proceed with its illicit activities and Europe will be even less safe.

I call on my fellow compatriots, lawyers, political dignitaries, Belgian MPs, MEPs, and MPs in other European countries to take urgent action to prevent the bill’s adoption. #No2Appeasement

Mrs. Rajavi said: Had the bombing and the planned massacre in Paris been successful, it would have been the most significant terrorist incident in Europe. If this bill is approved, no one in Europe will have security and immunity from the killers ruling Iran.”

The Belgian Judiciary found in its ruling that the plot to attack the rally in Villepinte in 2018 was not an act by an individual but commissioned by the Iranian regime’s Ministry of Intelligence and Security (MOIS). For this reason, the European Union sanctioned a branch of that Ministry and several Intelligence Ministry officials.

The Iranian Resistance has time and again called for a firm stance against the regime’s terror apparatus, the shutdown of its embassies, and the dismantling of its terror network in Europe.