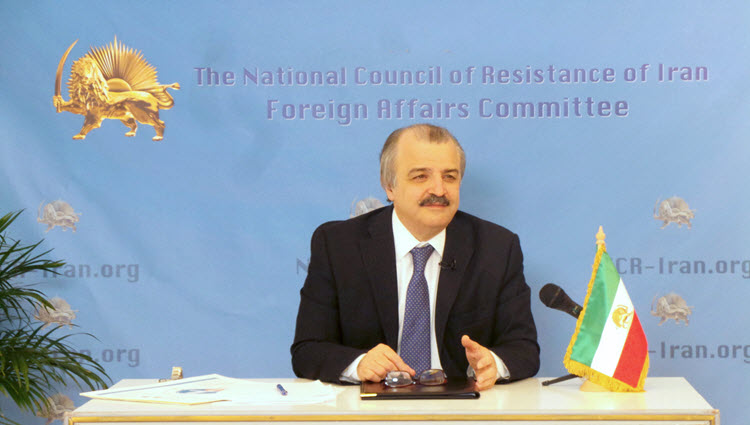 Mohammad Mohaddessin, Chair of the Foreign Affairs Committee of the National Council of Resistance of Iran (NCRI) conducted an interview with Media Express during the closing days of the Iran’s election cycle. He agreed to answer key questions regarding the election process and its impact on the Iranian people.

Below is part of the interview, taken from an article  published by Media Express, which can serve as tutorial on how the Iran elections work, and why they are best called a “sham” election.

Q: Over the past several days, the Iranian presidential candidates have increasingly been slandering each other. The question is why are candidates, whom you suggest are part of the regime, making such revelations against each other in public? Some might claim there is a genuine competition.

Mohaddessin: Let me be clear. When we say all the candidates are part of the system and loyal to the Supreme Leader, this is not our claim, but it is an undeniable fact acknowledged by the candidates themselves. According to the election regulations in Iran, all candidates must – and I emphasize ‘must’ – prove their loyalty in words and deed to the absolute rule of the Velayat-Faqih (supreme religious rule). Members of the unelected body which vets the candidates are appointed directly and indirectly by the Supreme Leader. In short, no one can be a candidate without the personal approval of Khamenei, period.

Looking at the candidates’ background, all of them have been officials of the clerical regime for many years. For example, the two main contenders, Rouhani and Raisi have held senior posts since the inception of the regime. They have been personally engaged in decision making and suppression of the Iranian people.

In my view, being loyal to the system and the Supreme Leader is not contradictory with making revelations against each other’s conducts and corruption. What we are witnessing is a fierce power struggle between different factions of the clerical regime. This power struggle has nothing to do with the Iranian people. It is an internal feud. However, there is a more fundamental conflict which is between the Iranian people and the entire regime. The latter is the more important one, which the West has yet failed to fully appreciate.

Q: You talk about internal feuding between the two factions. What does each faction represent and what are their differences?

Mohaddessin: The two factions of the regime, represented by Rouhani and Raisi, are not two different schools of thoughts. The intensifying internal feud is not a battle of “moderates” vs. “hardliners” as it is sometimes described in Western circles. The infighting within the regime is a reflection of the regime’s failure to address the most basic needs of the people, growing popular discontent and fearing that the current explosive situation might lead to a general uprising. Their difference is on what’s the best strategy for surviving.

Based on our information from within the regime, here is what each factions says internally, which you can also pick up from their public remarks. One faction which was until recently led by Hashemi Rafsanjani, to which Rouhani belongs, contends that the regime is on the verge of being overthrown and thus must adopt tactics which prevent the demise of the system. Their recommendation is to maintain the domestic repression, particularly regarding the opposition, continue with the nuclear and missile program but in a less provocative manner, deceptively engage with the West without changing fundamental principles of the regime in order to gain Western support to overcome the deadly crisis the regime is facing.

The counter argument by the other faction, led by Khamenei, to which Raisi belongs, is that any deviation even in a cosmetic and non-substantial manner from the previous policies would accelerate the collapse of the entire regime. They privately contend that the gap between the people and the regime is so wide that even a cosmetic reform would lead to a mass uprising which would lead to them losing their grasp on society. They make reference to the Shah that when he tried to liberalize his system by stopping torture and executions, in less than a year he was no longer in power.

That is why the people of Iran describe the two main candidates as the murderer Raisi and the demagogue Rouhani. In short, both factions are united in domestic repression, support for terrorism and meddling in the region, and the missile and nuclear weapons program, but with different tones in presenting their views on these issues. Moreover, their background is more revealing. Raisi was a member of the “Death Commission” in 1988 when 30,000 political prisoners, the majority of them from the People’s Mojahedin Organization of Iran (PMOI or MEK), were massacred. Rouhani at the time of that massacre and the mass executions of the 1980s was a senior official with responsibilities in security areas. He is on record to have demanded the execution of opponents in public at the Friday prayers’ sermon. His current Minister of Justice was also a member of the “Death Commission” alongside Raisi in the 1988 massacre. During his tenure as president of the regime, 3,000 executions have been carried out which he has described as implementing the ‘law of the country and God’s commandment’.

Q. Ghalibaf and Jahangiri withdrew from the presidential election. Can you explain why and what would be the impact?

Mohaddessin: In short, I believe this is yet another example which further reveals the ludicrous nature of this sham election. Everything was engineered right from the beginning. The Guardian Council approved six candidates, three from each faction, four of whom, right from the beginning were called “cover up candidates,” meaning they were not serious contenders but only meant to make a showcase, mainly for international consumption. For example, Rouhani and his first Vice President were both among the approved candidates. They stand exactly on the same platform. Jahangiri was there only to defend Rouhani. And now at the eleventh hour, he has withdrawn his name. On the other hand, Ghalibaf was there only to help Raisi in undermining Rouhani and Jahangiri. The other two candidates were as if they do not exist. One of them, Hashemi Taba, has said that he would vote for Rouhani. Can you imagine for a candidate to promote another candidate!! That speaks for itself.

Q. What are the prospects for the future? Would there be much or any difference if either faction wins the election? Some in the West suggest that Rouhani would be a better choice because he is prepared to talk to the West and open a new path even with the US. Where do you stand?

Mohaddessin: I have heard this argument time and again. I wish there was an iota of truth in this argument, i.e. the possibility of reform from within the regime, which we, as the democratic opposition to the clerical regime would have welcomed more than anyone else, because it would lead to the collapse of the regime. But neither we nor the world can afford to live in a world of fantasy. We must live with the realities on the ground. This regime is incapable of reform or change of behavior. Failing to recognize this fact would lead to further violence, spread of chaos and extremism in the region and more suppression of the Iranian people.

In his remarks to the commanders of the IRGC on May 10, 2017 Khamenei highlighted once again that this religious fascism cannot be reformed. He said take notice that “a change in character is no different to a change of state. This is the meaning of a change in behavior, meaning to annihilate the Islamic establishment.” Let’s not forget that the decision maker in Iran is not the president but the Supreme Leader. Therefore, expecting change of behavior of this regime, with all respect, amounts to nothing but naivety.

The notion of change from within the clerical regime is a mirage. This notion, which is widely advocated by the Iranian regime’s lobby, has already cost the Iranian people and peace and security in the region dearly. Under this illusion for years, Western governments opted for the policy of appeasement, hoping that making concessions to the regime would gradually lead to a change of behavior of the clerical regime. They turned a blind eye to the suppression of the Iranian people. They offered de facto impunity to those responsible for mass executions in Iran including the 1988 massacre of political prisoners. Those perpetrators are now the leading candidates for the sham election. It is long overdue for Western governments and all those who care about the human rights of the Iranian people and global peace and security to put an end to this false notion forever and to side with the Iranian people and their desire for change.

Q: Final question. Where do the people of Iran stand? What are their expectations of the election? Has there been any sign of discontent?

Mohaddessin: After 38 years of brutal suppression, torture and executions, the people of Iran have no expectation of the very same people who have been perpetrating these crimes. Those who advocate otherwise are either the Iranian regime’s lobby or at best ill-informed. This is an insult to the Iranian people to suggest as if they are pining any hope on their murderers, on the people who have caused suffering for 38 years, to bring them any prosperity.

The people of Iran want change, a fundamental change, which means an end to religious fascism and the establishment of freedom and democracy, separation of religious and state, gender equality, and full respect and equal rights for religious and ethnic minorities. Suggesting anything less than that is an insult to the intelligence of the Iranian people.

Reports from inside Iran indicate that despite absolute repression, the people of Iran are either ignoring this sham election or actively calling on others to boycott it. You only need to go on social media to get a better understanding of the true situation in Iran. “No to Murderer Raisi” and “No to Demagogue Rouhani” or “our vote is regime’s overthrow” have turned into national slogans. Walls on the streets of Tehran and many of the major cities are full of such slogans. Even in some of the rallies organized by the officially sanctioned candidates, people have participated demanding “release of political prisoners”. The PMOI network has also intensified its activities across the country to the extent that hardly a day goes by without the regime’s officials and state-run media expressing concern about the PMOI’s activities. For example earlier this week, state-run media published a photograph of a poster in Tehran of the Iranian opposition’s President-elect alongside a report which said: “Dubious activities in Tehran! There are reports that Maryam Rajavi’s photos have been seen in various locations in Tehran. This image is from under the Sattarkhan Bridge”.

The interview makes it clear that, in the end, the elections in Iran will be more of the same. Therefore, the Iranian people must continue to push forward for the current regime to be replaced by a true Iranian democracy with human rights at its core.