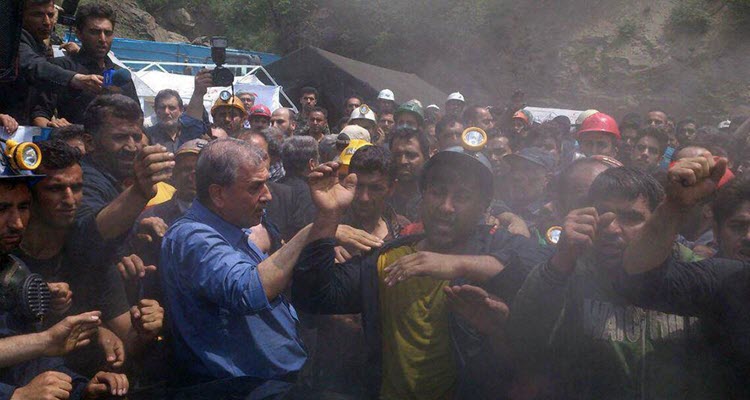 At least 35 miners were killed and another 25 others were injured in a major coal mine explosion struck northern Iran last Thursday.  Many required hospitalization after inhaling gas from the blast during rescue efforts. The explosion occurred in the Zemestanyurt mine, outside of Azadshahr.

In an interview with state run Tasnim news agency, Ramezan Bahrami, head of the regime’s Mining & Industry House in Golestan Province said, “Financial problems resulted in the lack of safety precautions in the coal mine. The workers themselves are reduced to negotiating for their own demands.” He said further that contributing factors for the high fatalities included lack of safety standards and inadequate emergency services in mining areas.

President Rouhani visited the site of the mine explosion on May 7, but many of the angry coal miners and their families didn’t believe his show of concern for them.

“They besieged and attacked Rouhani’s car after he visited the site,” the National Council of Resistanc of Iran (NCRI) reported.

In a video shared on social media, a spokesman for the miners could be seen shouting at the scene, “Why is there no safety at the mine? Why does no one care?”

Yi Luo, an associate professor of mining engineering at West Virginia University, explained that there are two main types of coal mine explosions: methane explosions and coal dust explosions. Methane explosions occur when there is a buildup of methane gas, (a byproduct of coal), in the mine, and it comes into contact with a heat source when there is not enough air to dilute the gas to levels to below its explosion point. Methane gas is pointed to as most likely contributing to the fatal blast at the mine.

The International Labor Organization issued safety rules and regulations on mining sites in 1986, stating, “In every country where coal is mined, it should be the duty of the government to enact sufficient appropriate legislation to ensure the safe conduct of the mines together with the minimum of risk to health.”

It adds, “An underground mine’s safety and health management system must provide for a gas monitoring system complying with this section. Every battery locomotive shall be equipped with a methane-meter that gives a visual warning to the operator of the locomotive when the concentration of methane gas reaches 1 per cent. Where the concentration of flammable gas in the general body of the air in the intake airway to a working face, measured at a location not more than 100 m from that face, exceeds 0.5 per cent, the employer shall:

A.Report that fact to a safety officer at the district office; and

B.Stop all activities in the section until the concentration is reduced to less than 0.5 per cent.

“Despite the fact that miners had sensed gas in the mine the day before and informed regime’s officials in this regard, it was to no avail, according to the few miners who survived. This mine lacked any gas detection device, ventilation system or safety measures. The tunnel was a one-way opening and in the event of an explosion all living creatures would be killed.” Despite not receiving their wages for the past 18 months, and without any insurance, the miners were required to continue working under unacceptable conditions, the National Council of Resistance in Iran (NCRI) reported.

“Iran plundering the people’s wealth to fund its exporting extremism in the region, weapons of mass destruction and domestic crackdown, or pouring such wealth into senior regime officials’ bank accounts, Iran’s workers will face nothing but being buried alive and suffering a slow death under this corrupt and repressive regime. The response they receive to their demands and strikes is nothing but imprisonment, lashing and being expelled from work. Rouhani may think he’s fooling workers with his concern but the time for concern passed long ago. Iran’s miners are angry. As much of the last century shows, from Poland to Chile to China, angry miners portend revolution. The only solution is to unite and declare solidarity amongst people from all walks of life to uproot the mullahs’ regime and establish freedom and a democratic rule in Iran,” they concluded.