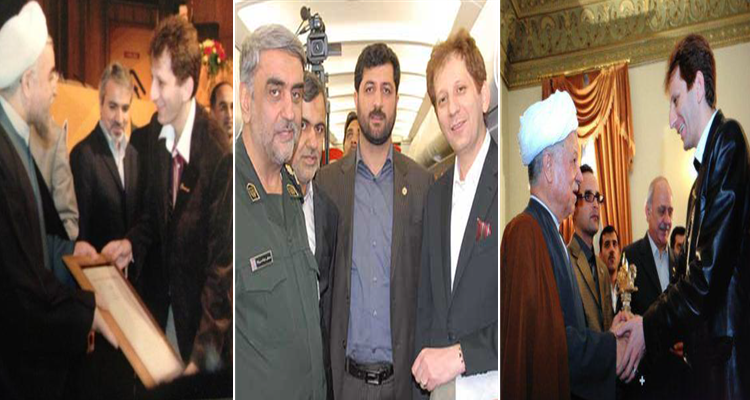 Just before the next set of sham elections for the Iranian regime take place, factions in the government are battling harder than ever, taking no notice of the serious social issues facing the people of Iran. Addiction, poverty, grave sleeps and unemployment is taking a back seat for the time being. Every day we are hearing new stories about the corruption within the government.

One such story is of Babak Zanjani who has managed to embezzle $3 billion with most of the top officials in the regime being aware.

Zanjani has connections all over the Iranian regime including Hassan Rouhani, Ali-Akbar Rafsanjani, Mohammad Khatami and Mahmoud Ahmadinejad. He is also well-connected to members of the IRGC.

Most of his wealth was earned under Khamenei, but Khamenei was forced to act because of the public nature of the news. He ordered the seizure of Zanjani’s bank accounts. In March last year, the Judiciary found Zanjani guilty of “forging bills of exchange”, “forgery of documents and bank statements” and “money laundering” and he was sentenced to death.

However, the Rafsanjani-Rouhani faction were not keen to execute him so they called for more information about the theft. This would give them time to cover-up embezzlements made by the Executive Branch’s ministers and authorities.

Rouhani had said the following on the matter: “With so many monitoring systems in the country… how is it possible that a massive $3-billion fraud happen in the previous government… How can one person steal $3 billion on his own? What were his connections? Who helped him? Who were the partners? What were their ranks? How were both oil and property placed in the hands of one man? How was hundreds of millions of dollars, besides oil, placed at his disposal? Where is the money that was given to this gentleman? Who contributed to him, in the beginning of this case? I suggested that this man be turned in to the Ministry of Intelligence so that the information on this case would be thoroughly clarified and refined, then it could be turned in to the Judiciary. For whatever reason, however, this idea was not realized.”

After Rouhani raised these questions, he was threatened to be disqualified for the next presidential elections by a spokesman for the Khamenei-backed Guardians Council.

It was found out that Zanjani had contributed to Rouhani’s presidential campaign. Khamenei’s Judiciary Chief, Mullah Sadeq Larijani, mentioned the links between Rouhani and Zanjani: “Babak Zanjani has said that he has contributed billions of dollars to the election campaign of the President (Rouhani); to preserve people’s dignity and avoid creating discord, we did not pursue many people. You say that we should look behind the curtains; we have no problems; we will summon everyone that he has mentioned and arrest them if necessary, to clarify the issue. We are also looking forward to see where the money of the Presidential Office is spent.”

Mullah Nasser Moussavi Largani from Khamenei’s faction asked: “If Rouhani is after clarity, why doesn’t he clarify all the issues about his brother Hossein Fereidoun? If Babak Zanjani is a criminal, and the previous government had encouraged him, why has Rouhani given him an appreciation award? Why has Rafsanjani, who is a staunch enemy of the previous government and Ahmadinejad, had a meeting with Babak Zanjani?”

This whole affair is going on while nearly a third of Iranians are starving. A number of Iranians have resorted to sleeping in pre-dug graves. Zanjani is wearing a $30,000 watch and goes around in a car worth $180,000.