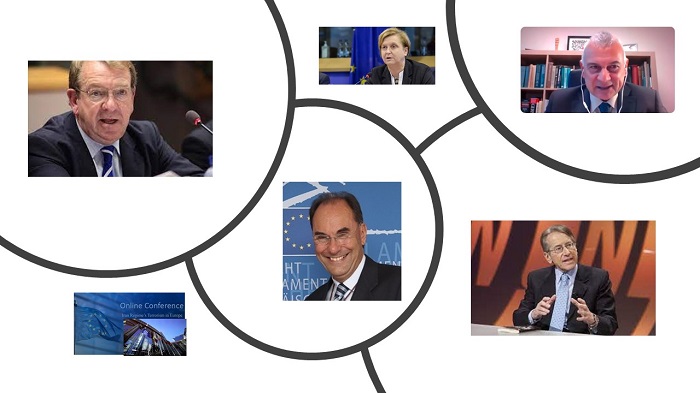 In a conference held on Tuesday, December 7, members of the European Parliament urged their countries to focus on human rights violations. MEPs, prominent European politicians, and Mrs. Maryam Rajavi, the president-elect of the National Council of Resistance of Iran (NCRI), spoke at the conference, which took place on the eve of International Human Rights Day on December 10.

Mrs. Rajavi’s keynote speech focused on the regime’s indiscriminate violence against members of the People’s Mojahedin of Iran (PMOI / MEK Iran), including the massacre of over 30,000 political prisoners in Iran in 1988, the majority of whom were MEK members and supporters.

“It has been taboo to mention the PMOI’s name in Iran for decades under the clerics’ reign. The restriction is part of the genocide perpetrated against the PMOI. “In June, [regime supreme leader Ali] Khamenei appointed one of the key perpetrators of the 1988 massacre as the regime’s president,” Mrs. Rajavi said, adding that the Iranian people have launched a call for Khamenei and regime president Ebrahim Raisi to be prosecuted for “genocide and crimes against humanity.”

Javier Zarzalejos, a Spanish MEP and Vice-Chair of the Special Committee on Foreign Interference in All Democratic Processes in the European Union, including Disinformation, emphasized that Iran’s leadership has committed the most egregious human rights abuses.

“We’ve gathered here today to call on the European Union and its Member States to adopt a firm Iran policy,” Zarzalejos stated. “It is imperative that words be translated into actions, that the 1988 massacre be recognized as genocide and a crime against humanity, and that the international community be urged to demand accountability.” The criminals who committed these crimes must be prosecuted.”

Other speakers emphasized Raisi’s role in human rights violations and the importance of viewing relations with the regime through the prism of Raisi’s misdeeds.

Petri Sarvamaa: ”I feel our democratic principles are being betrayed.”

“A man who has the blood of 30,000 MEK political prisoners massacred in 1988 on his hands becomes the president of the country, a president who is appointed by the Supreme Leader rather than elected by the people,” said Petri Sarvamaa, a Finnish MEP and Vice-Chair of the Committee on Budgetary Control. “The world community must have reacted to this immediately. The EU must have taken a position and acted according to its Global Human Rights Sanctions Regime. However, we did not see that, and I feel our democratic principles are being betrayed.”

The speakers advocated for a strong, comprehensive European response to Tehran’s threats.

The only credible alternative to the Iranian regime

Former Vice President of the European Parliament Alejo Vidal Quadras stated, “We must increase our pressure on the European External Action Service and the EU Member States to change their policies toward Iran’s totalitarian theocracy.” “Iran’s clerics have never stopped promoting terrorism in the Middle East, violating human rights inside Iran, and failing to comply with the JCPOA’s terms.” They have never claimed responsibility for the 1988 killing of PMOI/MEK members, which was ordered by Khomeini and is considered one of the biggest crimes against humanity since WWII. The High Representatives of European politics have insisted on their weak and cowardly approach to dealing with the cruelest dictator of the world. And it has provoked the regime in its terrorist attacks.”

“The movement led by Maryam Rajavi is the only credible alternative to the Iranian regime. “The MEK and Madam Rajavi’s ten-point plan are the ideal paths to ensure freedom for every Iranian and to transform Iran into a democratic, non-nuclear country with acceptable working conditions and environmental respect,” he stated.