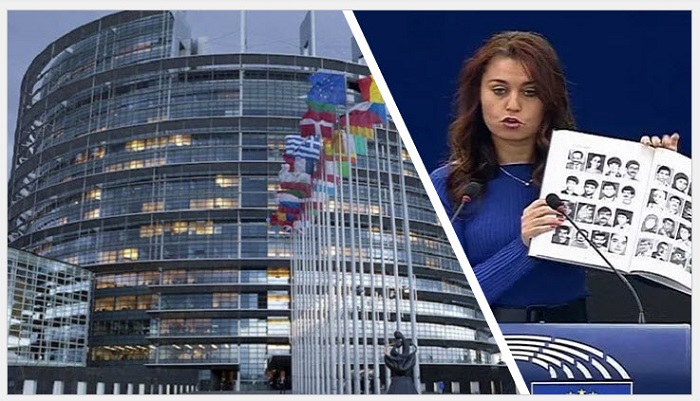 On Thursday, February 17, members of the European Parliament had a formal session, adopting a resolution criticizing the mullahs’ regime’s increasing number of executions in Iran. The MEPs also condemned the mullahs’ dictatorship for the massacre of over 30,000 political prisoners in 1988, calling for an international, independent investigation and the prosecution of Iranian regime officials, particularly current President Ebrahim Raisi.

“ over political divisions here in the European Parliament, we raise our voice in defense of the Iranian people. Since 1988, the massacre, there are ongoing crimes against humanity. We talk about the “death penalty,” but what exactly does that imply? “In many cases, it is just extra-judicial crime and fast executions without even the pretext of judicial or court proceedings,” MEP Anna Fotyga, Secretary-General of the European Conservatives and Reformists Party, remarked.

“Words are not enough. “Our action is required because of what we see in Iran – including the financing of terrorists on the outside and interference in the region and even in our territories – requires our intervention and extremely tough sanctions,” she added.

From January 1 to December 1, 2021, “at least 275 people were executed in Iran,” according to the EP resolution, “including at least two child offenders and ten women,” and “since Ebrahim Raisi took office as president in August 2021, there has been a significant increase in the number of executions, including of women.”

“Mohammad Javad, a boxing champion, was condemned to death in January 2022 after being convicted with ‘spreading corruption on Earth,'” per the resolution. and “Navid Afkari, a wrestler who stated that he had been tortured into making a false confession, was executed in September 2020.”

“Despite numerous requests from the international community, authorities continue to execute death sentences at a rate of one per day in 2021. In apparent violation of international law, the government is one of the few in the world that executes adolescents and juvenile offenders. The number of citizens belonging to minorities, particularly Baloch, Kurds, Arabs, and Bahá, who have been executed is disproportionately high.

And, to a considerable extent, the death sentence in Iran is an instrument to intimidate, persecute, and try to exterminate any type of political opposition in the nation,” said MEP Jordi Solé, speaking on behalf of the Verts/ALE Group. The MEPs also condemned “the steadily deteriorating human rights situation in Iran, especially for persons belonging to ethnic and religious minorities, based on systemic political, economic, social, and cultural discrimination,” as well as the mullahs’ “systematic use of torture in Iranian prisons.”

“ Women in Islamic fundamentalist regimes are the ones who pay the highest price. I have in my eyes the images of a shocking video, where a husband beheading his seventeen-year-old wife, accused of adultery, walks the streets smiling, exposing his head like a trophy. “In Iran, a man who murders his 14-year-old daughter receives eight years in prison; a woman who removes her veil faces up to 24,” stated Identity and Democracy Party MEP Susanna Ceccardi.

This severe condemnation came as MEPs expressed severe concerns about “large-scale enforced disappearances and summary murders of political dissidents that occurred in 1988,” which “have yet to be the subject of any investigation and no one has been held accountable.”

“Per capita, Iran is thought to execute the most people in the world, and this is a country that, of course, has a fair and independent court.” “I would appeal to Iran’s authorities, but the President of Iran was a member of the Death Commission in the 1988 massacre, which resulted in the judicial execution of 30 000 political detainees,” said Radoslaw Sikorski, a former Polish foreign minister.

MEPs emphasized that the “US State Department outlined that Iran remains the world’s largest state sponsor of terrorism in recent years, providing political, financial, operational, and logistical support to a variety of groups listed in both the EU terror list and the US list of foreign terrorist organizations,” referring to the Iranian regime’s ongoing support for global terrorism.