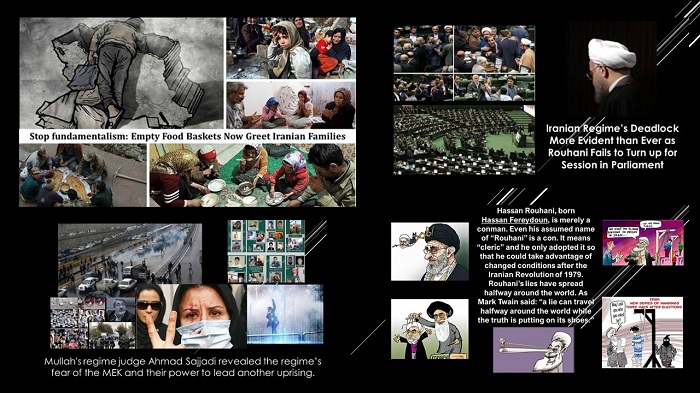 The Iranian regime has been appeased by Western powers for decades. European leaders have expressed keenness to negotiate with the so-called moderates within the regime on the basis that they oppose the hardliners. But moderates in the regime are a myth.

The  People’s Mojahedin Organization of Iran (PMOI / MEK Iran) and the National Council of Resistance of Iran (NCRI), analysis says the moderates and hardliners have the same goal and they work together to create an act that deceives foreign powers.

Moderates in the regime are a myth

President Hassan Rouhani was hailed as the new moderate that would change the course of the Iranian regime. When he was elected in 2013, policymakers in the West said that the country would change as a result.

However, time went on and a year after taking office there was still no sight of the reforms he had promised. Instead of ringing alarm bells, Western powers were happy to believe that a nuclear deal would be the catalyst for change.

The nuclear deal was eventually signed and it was criticized by many for being so one-sided, in the regime’s favor. The regime was given sanctions relief in exchange for what amounts to very limited and short-term restrictions. Furthermore, instead of clarification about previous military dimensions to Iran’s nuclear program, the issue was just dropped.

The 2015 nuclear deal was supposed to bring more peaceful conditions to the Middle East, but instead, the regime continued to run rampant across the region, even ramping up its malign activities. Many crucial issues were left out of the Joint Comprehensive Plan of Action (JCPOA). Iran really got what it wanted out of the deal.

The domestic situation in Iran

The domestic situation in Iran failed to improve during Rouhani’s first term. In fact, the suppression of the people continued, as did the executions.

Rouhani’s second term in office is drawing to a close and it is presumed that he is going to be replaced by one of the regime’s hardliners. During the parliamentary elections last year, many of those labeled “reformists” were removed from the running.

EU policymakers need to look at the reality of the situation. The hardliners, the reformists, the moderates – they all want the same. They want to prolong the regime’s existence.

Violations of the nuclear agreement

During both of Rouhani’s terms in office, the international community was unable to bring any great change to the Iranian regime’s behavior. If anything, its belligerence got worse, with extreme repression of the people of Iran, repeated violations of the nuclear agreement, and meddling in many conflicts in the Middle East.

Furthermore, the regime’s brazen terror plotting on European soil has ramped up. It is no wonder that the Iranian regime continues with its malign acts because it is never truly held accountable.

The EU’s policies of appeasement towards the Iranian regime therefore must end. The Iranian regime sees appeasement as a weakness which it will exploit at every opportunity. The United States under the Trump administration realized this and reimposed sanctions. It is time for the EU to follow suit as seven years is time enough to see that the current strategy is having no positive effects.