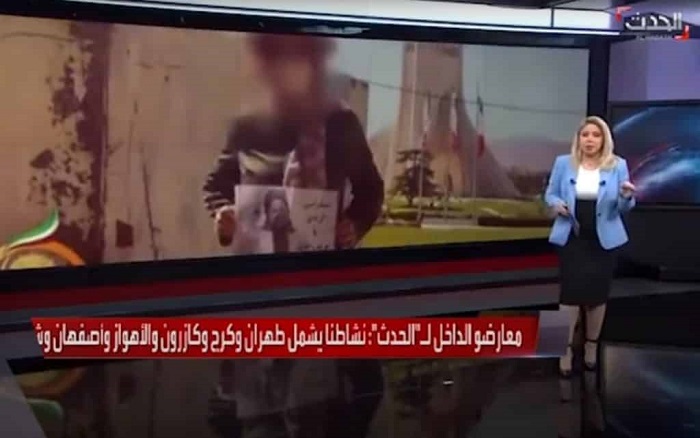 Iran’s official: television was disrupted on Thursday, January 27, when footage of Iranian Resistance leader Massoud Rajavi and Mrs. Maryam Rajavi, President-elect of the Iranian opposition group, the National Council of Resistance of Iran (NCRI), was shown.

After decades of witnessing the regime’s propaganda, the Iranian people were finally able to hear what they really sought on the broadcast: “Down with [Ali] Khamenei,” the regime’s Supreme Leader, and “Hail to Rajavi.” The Iranian Resistance putting its might on display, according to many international media sites.

The Arab-language Al-Hadath TV aired an exclusive report on the Iranian Resistance Units, a network linked with the People’s Mojahedin of Iran (PMOI / MEK Iran), and its actions across the country. Members of the MEK’s Resistance Units were interviewed by Al-Hadath.

While the Iranian regime has been beset by infighting and growing protests over the last two years, a new strategy and its threat to the system looks to be on the horizon. This is the same strategy as the thousand “Resistance Units,” but this time inside Iran.

The objective of these Resistance Units is clear: to tear down the regime’s wall of fear and repression throughout society. These missions are carried out with great bravery by the units. They hang “Down with Khamenei” banners and torch Qassem Soleimani’s statues and the bases of the Revolutionary Guards (IRGC).

The Resistance Units are active in all Iranian cities, according to Al-Hadath sources, particularly in Tehran, Karaj, Kazeroun, Ahvaz, Isfahan, Shiraz, and Mashhad.

According to these sources, the Resistance Units operate in “small groups” in order to evade prosecution and imprisonment by the regime’s security apparatus. This network is now the most well-organized and widespread movement among people from all walks of life, including students, workers, farmers, truck drivers, and even merchants.

Thousands of Iranian Resistance Units took part in the annual Iranian opposition march in Albania, challenging the regime with audio-visual messages, dealing an unparalleled blow to the regime’s internal security.

“Sara is my name. I’m 32 years old and currently reside in Tehran. I am a teacher who covers the MEK’s online activity. We use social media to combat this government. Social media is a revolutionary instrument used to overthrow the regime. Even if the internet is shut down, the Iranian opposition’s actions will topple the regime. Iran’s condition is grave, and people are outraged as a result of Ebrahim Raisi’s president,” Al-Hadath reported, interviewing a young Iranian Resistance member.

“I am a representative of Tehran’s Resistance Units. I swear an oath in front of the MEK’s Secretary-General, Ms. Zahra Merikhi, to fight the vile and merciless tyranny till the last drop of my blood and breath. I am ready,” said another young member.

The Iranian regime’s fear of losing control was quickly mirrored in state-run media, according to Al Hadath Reporter.

The state-run Mardom Salarie newspaper publicly admitted that the MEK is the regime’s primary danger today in its editorial “wrong direction.”

The MEK’s domestic and foreign operations, per the article, have pushed the regime to its current precarious state.

“The MEK and the creation of secret units,” the state-run Rajanews website reported, “demonstrate the relevance of the Resistance Unit’s everyday operations in Tehran’s other cities.”