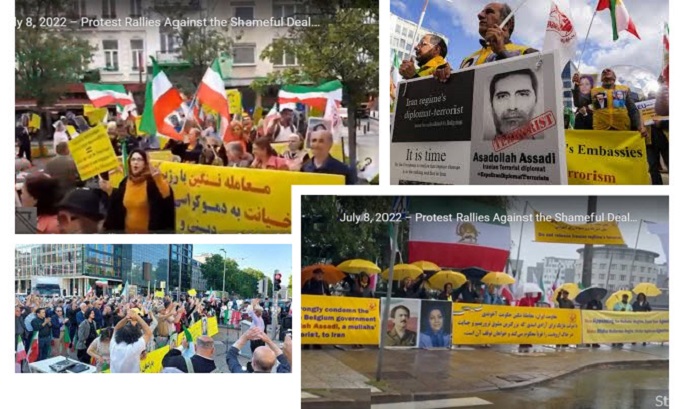 Assadollah Assadi, a diplomat-terrorist for the Iranian regime who attempted to blow up the Resistance’s annual conference in France in 2018, warned the Belgian police about the repercussions of being tried before he ever set foot in a courtroom during his interrogation. He declared that the regime’s international allies “Will not remain silent” and that Western nations would be held accountable in any trial.

Western countries’ judicial systems are largely independent, so appeasement policies have less of an impact on them. They ignored his threats and as a result, he was the first regime diplomat charged and given a 20-year prison term.

Because Assadi knew he had no chance of reversing the court’s decision, he declined to do so. It turned out that the trial’s extension would expose more private information about the terrorist activities carried out by the regime’s diplomatic network.

Before the verdict was rendered, the regime was already preparing the grounds for that “next opportunity.” The Belgian Chamber of Representatives was presented with a bill that included a treaty to “swap” prisoners with the regime. The treaty was signed in the strictest of secrecy and was “sandwiched” between two trade disputes with two other nations.

The Iranian Resistance launched a global campaign in response to the disgraceful deal, and it quickly gained the support of numerous dignitaries all over the world. The bill, which was supposed to be approved silently, without any expression of concern, was subjected to two days of intense debate by the Belgian Parliament’s Foreign Relations Committee.

The bill’s introduction to the parliament has been postponed until Thursday, July 14.It goes without saying that remaining silent in the face of such instances will only inspire the Iranian regime to increase its terrorist activities.

As a result, the case of the Assadi swap will have grave repercussions going forward because it sets a perilous precedent and incites other nations to follow suit.A fact that appeasers have been ignoring for more than 40 years is that endangering the lives of Iranian refugees in Europe and America, however, it will also endanger the lives of these nations’ citizens.