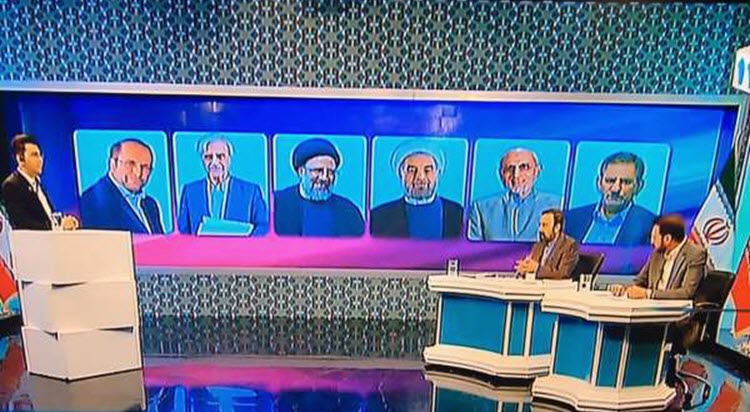 The first of three debates in the Iranian presidential election campaign has been televised. The debate was “hopeless” and “boring” according to the television viewers who watched it.

The candidates participating in the debate are all current government officials and they made an effort to only speak about economic issues rather than political problems in the country.

In the three hour debate the candidates mentioned the protracted downturn results regarding the country’s economy.

Mostafa Mirsalim, a former minister of culture and Islamic guidance, pointed out that many people who used to live in villages have left their homes and have moved to the outskirts of larger cities. The city outskirts are now known as “unauthorized settlements” and most of the dwellings do not have facilities such as water or electricity and lack transport routes.

The current mayor of Tehran, Mohammad Bagher Ghalibaf, said that the current number of people living in the outskirts is around 11 million.

Ebrahim Raisi, the candidate that was involved in the 1988 massacre of political prisoners, said that Ghalibaf’s information is out-of-date by about four years. Raisi believes the true number is around 16 million.

Raisi also criticised the current government for its tiny public donations that are a direct result of subsidy cuts. He said that the donations were not much more than a few dollars per month.

Speaking about the number of people in the country that do not have an education, Mirsalim said he believed the number was over 10 million.

The current vice president – Eshaq Jahangiri – another candidate, said that someone had stolen assets worth 3.8 million from the government. He was very careful not to mention any names.

Mayor Ghalibaf drew attention to the lack of social support for the government. He said that 96% of people are not satisfied and pointed out that many people do not own anything. Regarding the economy of the country under Rouhani’s government, he questioned where the $150 million that was loaned by banks went.

Rouhani, responding to many criticisms, said that the fault is that of Ahmadinezhad’s government because for a decade there were 6.6 million people entering the job market but during that time only 600 jobs were created. Rouhani was reminded by other candidates that he promised that 4 million jobs would be created during his time in office. This has not happened.

The debate continued as such. Nothing important was discussed, but one candidate did reveal his true intentions. He said that the “priority is the preservation of the Islamic Republic”.