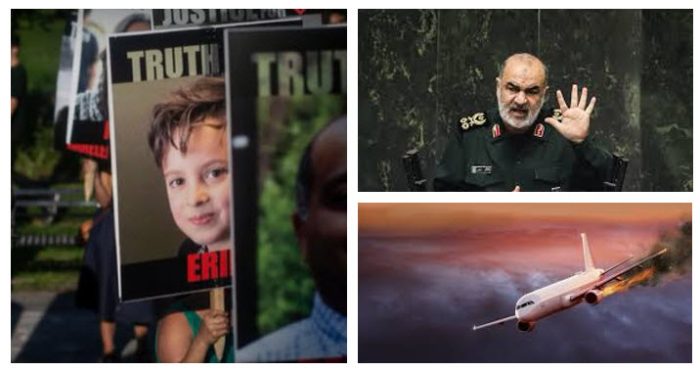 On Saturday, Iran’s daily newspaper Sharq published an interview with a former Health Ministry official and his wife, who lost two children when Ukraine International Airlines Flight 752 was shot down on January 8, 2020, by two Iranian missiles. Despite Tehran’s initial attempts to conceal the occurrence, authorities were eventually forced to admit that the crash was caused by the Islamic Revolutionary Guard Corps’ air defenses (IRGC).

Mullahs: the incident was an accident caused by fears of US

Despite this admission, the regime has continued to obstruct independent investigations and conceal details of the incident, fuelling doubts about the official narrative, which described the incident as an accident caused by fears of US retaliation following IRGC missile strikes targeting American forces in eastern Iraq.

Now, Mohsen Asadi-Lari and his wife, Zahra Majd, have publicly stated that their own talks with regime officials lead them to suspect that Flight 752 was deliberately shot down “to create a human shield” against serious US reprisal. When challenged by the Sharq interviewer, Majd stated that this understanding is supported not only by private talks but also by public pronouncements from some officials.

“They openly declare that if the jet hadn’t been shot down, a devastating war would have broken out the next day, putting the lives of ten million people in jeopardy,” he said.

Four countries’ citizens and permanent residents were killed in the incident

Several other relatives of the 176 persons killed in the incident two years ago have expressed similar sentiments. They had previously stated that current evidence supports the assumption that the missile strike was a crime, and that more evidence would be unearthed if the Iranian regime’s authorities adopted a transparent approach to dealing with domestic and international probes.

At least four countries’ citizens and permanent residents were killed in the incident. The vast majority of the travelers were connected to Canada in some way. Last Monday, it was revealed that the Ontario Superior Court had ordered Tehran to compensate the families of six victims more than 80 million dollars. Although the plaintiffs are unlikely to see any of the money, with the exception of a small sum that may be accessible through asset seizures in Canada, the ruling is significant because it confirms the court’s earlier ruling that the missile strike was an intentional act of terrorism.

Tehran destroyed the crash site and then harassed families

Families have voiced dissatisfaction with Canada’s apparent unwillingness to pursue criminal charges against those involved, but some supporters are confident that the Ontario court’s ruling may have an impact on Canadian government policy.The United Nations Human Rights Council is currently being urged by the Association of Families to “step in and mandate an independent international investigation.” Although the group has made no attempt to stymie any investigation, it has brought to light a number of facts that could lead to criminal charges, as well as the purposeful destruction of the jet.

The authorities in Tehran may have covered up more proof of premeditation in the aftermath of the accident and in the two years since. In an apparent effort to reduce public attention and scrutiny of the occurrence, Tehran destroyed the crash site and then harassed families and prevented funeral gatherings.The Association of Families is certain that “high-ranking Iranian regime officials, not merely a handful of low-ranking IRGC members, as the Iranian government alleges,” are responsible for the downing of Flight PS752.