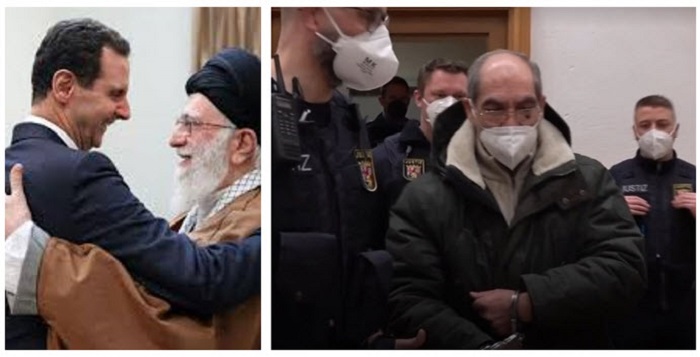 On January 13, a German court condemned a former Syrian government colonel to life in prison for his role in the assassination of dozens of persons and the torture of hundreds of Syrian political opponents. Until now, totalitarian regime criminals were protected by an unwritten but effective law as long as their regimes were in power.

There were times when the despotic regime misused impunity

However, a landmark German court judgment has shattered the trend, revealing that “sovereignty” has its boundaries and that the law can prosecute people beyond their own country and bring them to justice. There were times when the despotic regime in Tehran bribed its Western interlocutors with billions of dollars from the Iranian people’s riches in order to blacklist the Iranian Resistance as a “terrorist” group.

They sought to put the opposition in handcuffs and outlaw all forms of protest. The administration aimed to spread a cloak of oppression overseas while restricting any and all forms of political activism at home. But, thankfully, judicial independence and the quest for justice in the free world were both too strong to allow Iran’s liberation struggle to be silenced. The Iranian Resistance waged a long legal campaign, winning scores of court cases and forcing the People’s Mojahedin of Iran (PMOI / MEK Iran) to be removed from blacklists in the United Kingdom, the European Union, and eventually the United States.

This court showed the criminals no longer have a safe heaven

Indeed, some of these governments, who continued to pursue a “constructive dialogue with Tehran,” were ashamed, and worked with the regime to discredit the successful legal campaigns in order to cover up their failing policies. They attempted to rewrite history by saying that the delisting was the consequence of a vigorous lobbying and public relations campaign by the MEK and its allies, rather than a legal success.

Former rulers and executioners have been arrested, tried, and convicted around the world, including the former Yugoslav president, a former Bosnian Serb commander, the former Rwandan president, and the former Sudanese president, all of whom were sentenced to life in prison for repressing and killing people.

However, one aspect of the latest German court judgment is that the verdict was given against an individual whose associated government is still in power, rather than the criminals of an overthrown state. This indicates that abuses of the notion of “sovereignty” and immunity of sitting government officials have been ignored, and criminals no longer have safe heaven.

This is a moment that the entire globe should rejoice over

This is a moment that the entire globe should rejoice over. “A historic leap towards justice,” said UN High Commissioner for Human Rights Michel Bachelet. Others in the world’s leaders have expressed similar sentiments. Simultaneously, a Swedish court in Stockholm is prosecuting one of the perpetrators of the massacre of 30,000 political prisoners in Iran in 1988.

The German court’s historic decision is based on the Syrian people’s magnificent resistance, which has resulted in over 500,000 victims, as well as the valiant sacrifices of those who collected, validated, and released hundreds of thousands of documents related to the dictatorship of Bashar al-Assad.

Massoud Rajavi: stated crimes in 1988  must be persecuted

The ruling also sends a message to the criminal dictatorship in Tehran’s agents and mercenaries: Beware, there is no safe haven for you anywhere in the world. “They must be brought to trial in the framework of crimes against humanity,” Massoud Rajavi, the Iranian Resistance’s leader, has stated. The probe into genocide and crimes against humanity perpetrated during the killing of political prisoners in 1988 should be expanded to include the massacre of the November 2019 uprising, as well as the fate of all inmates slaughtered throughout Iran under Khomeini and Khamenei’s reign.”

In 1988, as Deputy Prosecutor of Tehran, he was one of the four individuals who Khomeini appointed to carry out his infamous fatwa to massacre imprisoned activists of the People’s Mojahedin Organization of Iran (PMOI/MEK).