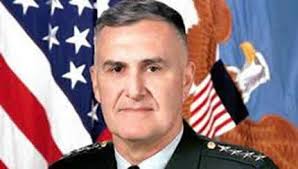 General Hugh Shelton wrote in The Hill, saying that its time for the international community to stand behind the regional coalition against the regime’s agents in Yemen. But it should not just stop there and Tehran’s influence should be severely restrained in other regional hotspots like Iraq and Syria.

He said; “Iran’s critical military and logistical support for the dictatorship in Syria, its backing of Shiite militias in Iraq, and support for armed militias in Yemen have inflamed sectarian conflicts while deeply destabilizing the region. Tehran wants to expand its sphere of influence and establish a fundamentalist block to stand against progressive forces.”

“In Iraq, Tehran has taken advantage of the calamity created by ISIS in order to reassert its hegemony in the country.

espite the removal of its chief ally, Nouri al-Maliki, and the rampant sectarian repression inflicted on the country by that government, Iran has poured considerable military and logistical strength into its western neighbor. It has established a sizable presence on the ground through its IRGC commanders, who lead murderous Shiite militias widely accused of carrying out war crimes.”

‘The regime’s regional actions have led to a blood bath in Syria, genocide in Iraq and a serious crisis in Yemen.”

The fourteenth chairman of the Joint Chiefs of Staff wrote; “The policy of appeasement and accommodation has emboldened the regime to covet for more territory and regional influence.”

“It is time for the international community to stand behind the regional coalition against the regime’s agents in Yemen. But, it should not stop there. Tehran’s influence should be severely restrained in other regional hotspots like Iraq and Syria.

his demand has also been echoed by the Iranian opposition and Mrs. Maryam Rajavi, the president of the National Council of Resistance of Iran, who praised the formation of the coalition as an ‘extremely essential and inevitable united action.”

“Confronting Iran and its expansionist policies is the first step to avoiding further sectarian bloodshed and future regional wars. If such a policy had been pursued in Syria, it would have saved hundreds of thousands of lives and prevented millions more from being displaced.

he world cannot afford to collaborate with Tehran’s tyrants solely for the sake of securing a nuclear deal. Western powers must act before it is too late