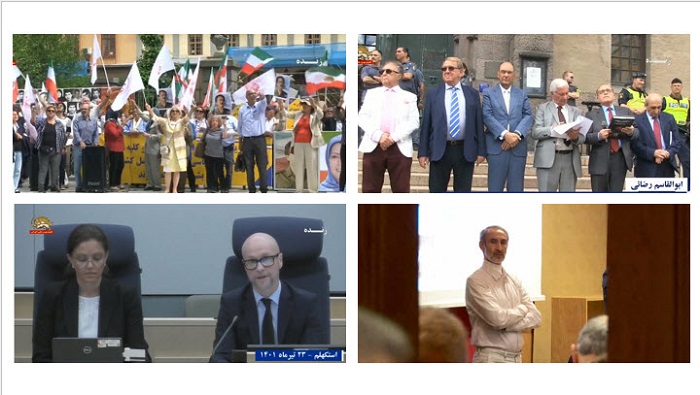 Stockholm court handed down a life sentence for Hamid Noury, an Iranian prison guard involved in the 1988 massacre. Noury was arrested in 2019 in Sweden in the context of the Universal Jurisdiction and for his participation in the 1988 genocide of 30,000 political prisoners, mostly MEK members. A rally for the National Council of Resistance of Iran (NCRI) and the People’s Mojahedin of Iran (PMOI/MEK) was held in Stockholm, Sweden, on Saturday by a large number of Iranians who support freedom.

Numerous Swedish lawmakers, as well as well-known European leaders, also attended this rally. During Noury’s trial, survivors of the 1988 massacre in Gohardasht prison in Karaj, west of Tehran, where Noury was employed as the deputy prison warden, testified in graphic detail.

MEK supporters and family members of the 1988 victims staged a sit-in in front of the courthouse concurrent with Noury’s 33-month trial. The rally’s main message is that all those responsible for the 1988 massacre must be brought to justice, including Ebrahim Raisi, the regime’s current president and a member of Tehran’s “Death Commission,” which was in charge of sending prisoners to the gallows.

Swedish MP Ingemar Kihlström: Criminals must be prosecuted. In my parliamentary request, I am fighting for the women of Iran to have equal rights. Let’s work together to restore human rights in #Iran. #1988Massacrehttps://t.co/z3g6wuGrj1

“Of course, we welcome the ruling, which is the outcome of your efforts and sacrifices and deserves to be congratulated. However, full justice will be only done when all the masterminds and perpetrators are prosecuted in the Iranian people’s courts. That includes Ali Khamenei, Ebrahim Raisi, Hossein-Ali Nayeri, Gholam-Hossein Mohseni Ejei, and others,” explained NCRI’s President-elect Mrs. Maryam Rajavi.

“We still have a long way ahead of us before we achieve complete justice. But the Iranian Resistance’s extensive legal, political, and enlightening campaign over the past 33 months has already achieved a great victory so far,” she added.

Many other well-known politicians and human rights advocates spoke out in support of the MEK, applauding the Swedish Court’s decision:

“Many Iranians have come to voice their protest against the regime in Iran, which spreads terror and fear, and suppresses its population.” Swedish MP Kjell Arne Ottosson noted. “The number of executions has increased in Iran, and that is why you’re here today to show your protest. In the Swedish Parliament, we support your cause for a free and democratic Iran.

“The days of the Iranian fanatic regime are counted. The trial of Hamid Noury proves it. We will go on with no hesitation for the freedom of the Iranian people until all criminals of the regime are brought to justice and given the punishment they deserve,” Former European Parliament VP Alejo Vidal-Quadras commented.

The current uprisings in Iran are proof that the 1988 executioners’ message and spirit still resonate today and that their deaths were not in vain. Despite being heart-breaking, the testimonies of the massacre’s survivors or victims’ families barely touched the surface of what actually happened during those dark days in Iran’s multiple prisons.

Your unrelenting nine-month demonstrations outside the Court in Stockholm had an unforgettable role in this great campaign. #JusticePrevails#1988Massacre pic.twitter.com/LRyZh2D6fQ

“The verdict of the Swedish court in the conviction of Hamid Noury means the conviction of the entirety of the mullahs’ regime. It is a very strong document to try other criminal leaders of the mullahs’ regime, especially Raisi. It is a victory for the Justice Seeking movement. Raisi’s hands are tainted with the blood of Iran’s children. He has executed many Iranians,” Khebat Org. Secretary-General Kak Baba Sheikh Hosseini continued.