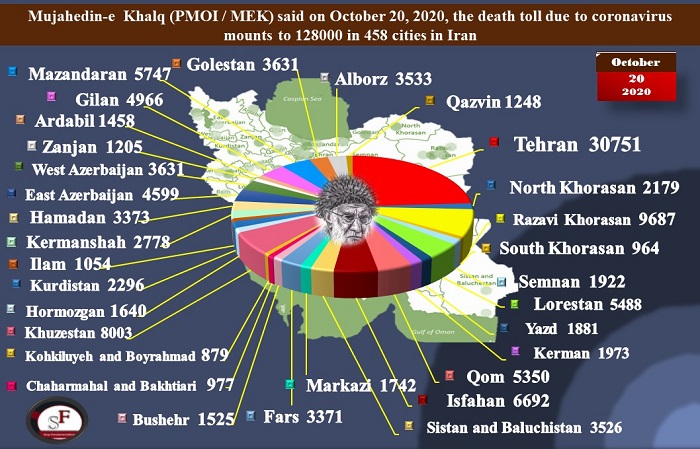 the People’s Mojahedin Organization of Iran (PMOI / MEK Iran) reporter recently announced that more than 128,000 people have cut their lives short due to contracting COVID-19. This has taken place in 458 cities throughout Iran’s 31 provinces. However, the official death toll according to the regime is only 30,751.

The death toll by province is as follows:

By reopening schools and public places, the regime ruling #Iran has triggered a national disaster and the most innocent victims are children and young students.#COVID19 https://t.co/opip0iVZDM

Over 128,000 people have died of the novel #coronavirus in 458 cities checkered across all of #Iran’s 31 provinces, according to reports tallied by the Iranian opposition PMOI/MEK as of Tuesday afternoon local time, October 20.https://t.co/YnUDAvlzPT

Just to dispel the regime’s downplaying of the death rate the Health Ministry spokesperson reported that on Monday there were 337 deaths, which is twice the number of the first wave on April 4th when 158 deaths took place.

With the likely deaths to come, Deputy Health Minister, Iraj Harirchi, has demanded that restrictions take place until at least the virus is under control. He said that the situation was now so serious in Tehran that there are 5,300 patients in the hospital. There are no vacant beds left for the day to day patients and the medical staff is being pushed to their limits. He also said restrictions need to be put in force to limit the spread of the virus.

The Tehran City Council chair said last Monday that throughout the country the situation is desperate with 5,000 new cases being diagnosed every day across the country and 150 deaths in Tehran each day.

More than 128,000 people have died of the novel #coronavirus in 458 cities checkered across all of Iran's 31 provinces, according to the Iranian opposition PMOI/MEK.

Alireza Zali, the head of the National Coronavirus Task Force issued some alarming news on Monday, “…..In the third peak, we’ve seen new developments, including patients in more critical conditions. The duration of hospitalization has increased in comparison to the first and second peaks. The number of patients directly taken from emergency to ICU has also increased. 20-25 percent of daily incoming patients need special care since their entrance. Today, we wrote a letter to the health minister and requested that for next week’s holiday, they consider restrictions and fines on traveling.”

Payam Tabarsi, Tehran’s Masih Daneshvari hospital head of infectious diseases, has expressed his fears that many staff members have not gone back to work due to COVID-19 and just to make matters worse the number of COVID-19 victims in hospital has increased as well as the number of deaths. He said the situation could not be much worse.

Kurdistan Medical Sciences University dean stated on Monday that more and more inpatients require immediate entry to ICU and that very soon there will not be enough facilities to handle the load.

Overcoming #Coronavirus, as is the case with overcoming poverty and high prices in contingent upon overthrowing the clerical regime and establishing people's sovereignty, in which case all of our nation's resources will be utilized for advancing and improving people's lives #Iran pic.twitter.com/JdH2LRvGic

IRIB, an official broadcaster for the regime, reported that the Alborz Medical Sciences University caretaker said on Monday that in Alborz there were more deaths being counted and the total number of deaths has reached 1,445. Just yesterday, 127 new Covid-19 patients have been admitted to hospitals making the present total of 792 hospitalized patients.

MEK networks inside Iran reported nearly 130,000 People so far Lost Their Lives to COVID-19 in Iran, but the mullah’s official death toll according to the regime is only 30,751.

The mullah’s regime has attempted to portray the situation in Iran’s in glowing terms. The reason is to counter the information provided by the  (PMOI / MEK Iran) which consistently shows that Covid-19 is sweeping across Iran without hindrance.

The #coronavirus is the mullahs’ strongest ally; imprisonment and executions are their most essential instruments of power; and the Islamic Revolutionary Guard Corps (IRGC) is the most reliable killing machine to prop up their rule. #Iran pic.twitter.com/ueKbLQ2W20

Mrs. Maryam Rajavi the President-elect of the National Council of Resistance of Iran’s (NCRI): While the people of Iran are suffering from a shortage of special medications including for diabetes, the IRGC exports these medicines to countries in the region. In the meantime, Rouhani celebrates a bogus victory over the import &export of arms for further belligerence.