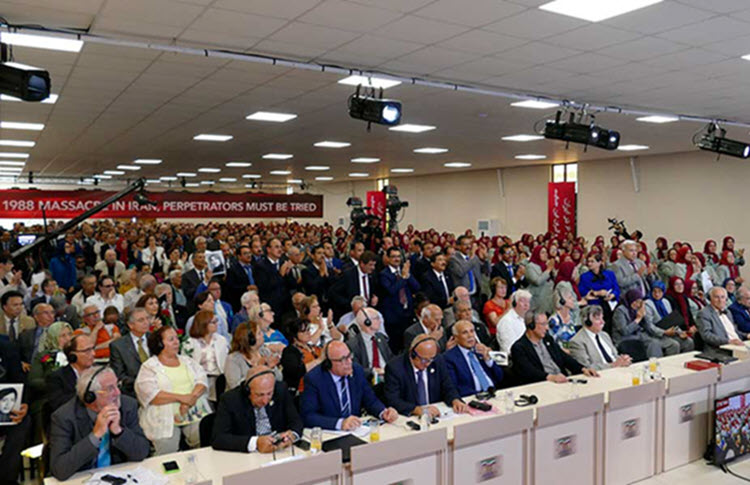 Survivors and witnesses of the 1988 massacre in Iran gave testimony on Monday about what they witnessed after Ayatollah Khomeini issued a fatwa that led to the massacre of 30,000 political prisoners after only show trials held entirely by Death Commissions. They had gathered in Ashraf 3, the Iranian Resistance headquarters in Albania, on the fifth and final day of the Free Iran rally for the “Call for Justice on 1988 Massacre” conference.

The first witness, Kobra Jokar, was heavily pregnant when arrested by the Revolutionary Guards (IRGC). She was beaten by the IRGC, before being taken, unconscious, to the torture chambers of Evin Prison. There, she and her husband were tortured in front of each other.

Soon after, her husband was executed along with 75 others, with a torturer telling Jokar that he wanted to prevent her husband from ever seeing his son.

The Regime executed at least 50 pregnant women, while the rest were denied inadequate medical care even when giving birth. The children born inside prisons often lost their parents, but were not released from prison. Instead, the children were given to the other prisoners to look after. Some children were even torture in order to extract information about or from their parents.

Another witness, Hengameh Haj Hassan, a nurse who was arrested for supporting the Iranian Resistance group MEK managed to escape in 1987 said that all those she shared a cell with were executed in the 1988 massacre
She said: “In prison, we were subjected to severe tortures. Insomnia, packed cells, sleeping in coffins were what we had to endure…The roots of our hopes and faith in our leaders helped us overcome the dark times in prison and to fight for freedom.”

Haj Hassan describes a horrific torture, where prisoners were kept in cages too small for them to do anything but squat. They were blindfolded, not allowed to make any noise, prevented from sleeping, and not given proper food and hygiene requirements.

She said: “The torturer told us that we would die here… the torturers sought to break our will and force us to turn our back to our struggle… The torturers thought they would break our will through torture. However, they only made us stronger, as we understood that this proved what we were doing was right. “In prison, we considered ourselves PMOI representatives and we deemed it our responsibility to defend their values. When I came out of prison, the first thing I did was rejoin my organization. This is a path that will continue until the end.”

While Homa Jaberi, who spent five years in prison, explained about the 40 days she spent at a compound called the ‘residential units’, created for MEK supporters who didn’t break under torture.

Jaberi said: “On the first day, I was tortured brutally with whips and physically beaten. They took all of us to a room, blindfolded us, and told us that they would kill us until that night. They tortured us for hours until midnight. My hands were swollen from the whiplashes. My face and body were bruised. The regime’s torturer said, ‘No one will hear you here. You will all die here.’ They kept us awake for many days and didn’t let us sleep.”

While Jaberi was returned to Evin Prison, others stayed there much longer and “lost their mental balance” but she still has hope of a free Iran.

Renowned Spanish jurist Juan Garcés told the conference: “In the case of the 1988 massacre, this is a crime against humanity. Not only the criminal code of Iran had been violated, but also the known international norms were trampled during and before this crime…We need to know the facts, those responsible, the rights trampled, and which court is qualified to tend to this case. You have the right to the truth. You have the right to reparations and the right to justice.”

Maryam Rajavi, president of the Iranian Resistance, said that since 1988, the clerical regime has taken numerous measures to eliminate the traces of the mass graves of victims.

She said: “The time has come for the United Nations to form an international fact-finding mission for the 1988 Massacre, and the world to recognize the right of the people of Iran to resistance and struggle to overthrow the mullahs.”