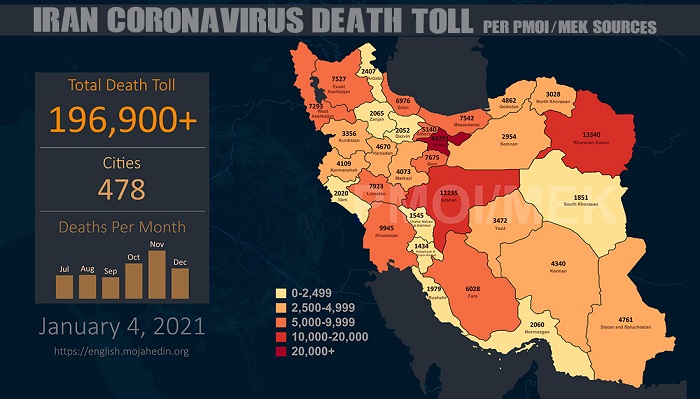 More than 196,900 Iranians have now died from the Covid-19 pandemic that has affected every corner of Iran. These figures have been obtained from sources within the country by the National Council of Resistance of Iran (NCRI) and the  People’s Mojahedin Organization of Iran (PMOI / MEK Iran), and contradict the underreporting by official sources that claim that only 55,540 Iranians have died.

The three major locations where fatalities have been highest remain:

Power plants burning heavy oil known as mazut have caused severe air pollution in #Iran. More than 196,500 people have lost their lives due to #COVID19 which has spread to 478 cities in Iran, reported by #NCRI and #PMOI #MEK.https://t.co/oR6Pjc0gh6 pic.twitter.com/zT1g8kHKnU

Controversy about vaccine rollout within Iran continues. The regime appears to be trying to get away with an unproven locally produced vaccine, but medical sources urge the government to use internationally proven vaccine sources.

Health Minister Saied Namaki had this to say last Sunday: “I am asking people to not listen to the different news reports about the Covid-19 vaccine so that you won’t get worried about all fringe topics. We are pursuing another vaccine with another vaccine-producing vaccine. God willing, we will begin the third phase of this vaccine in the Pastor Institute in late January or February. We hope to be using our indigenous vaccine next year.”

This statement contrasts with a statement by Iran’s Allergy and Immunology Association a day before which said:  “Considering the daily spread of this pandemic, the high population, the scope of this illness, the high death rate, and the increase in the possibility of this virus mutating as the illness spreads, a long period is needed to finalize phases one, two and three of the vaccine’s clinical stages and limited capacity for mass production.

Over 196,500 people have died of the novel #coronavirus in 478 cities checkered across all of #Iran’s 31 provinces, according to reports tallied by the Iranian opposition PMOI/MEK as of Sunday afternoon local time, January 3.https://t.co/UTdHGsmIba

This association is emphasizing urgently purchasing necessary amounts of vaccines approved by international organizations (with full transparency regarding the type of the vaccine and the country where its produced). It is obvious that any delay in this regard will result in irrevocable consequences and the loss of many more lives, while increasing the chance of new and stronger strains of this virus, resistant to the vaccine, entering the country.”

Meanwhile, the pandemic just rolls on throughout Iran with dire statistics being relayed every week. Alireza Raisi, who is a spokesperson of the National Covid-19 Task Force said this about the spread of the virus: “The illness did not decrease in the four provinces of Ardabil, Golestan, Gilan, and Mazandaran. In Mazandaran, most of the villages are engaged with this virus. This province had not entered the third wave and now they are engaged.”

A member of the Iranian Majlis (Parliament) has added to the worries about the pandemic in Iran stating that air pollution in Iran’s major cities has accentuated the negative effects of the disease. “Air contamination in Tehran will have major consequences and lead to breathing disorders,” he said. “This year, due to Covid-19, the subject of air contamination must be taken far more seriously because some people, after suffering from coronavirus, now have lung illnesses and they are far more prone to dangers than ordinary people. When air contamination has reached dangerous levels in Tehran the government must take action to shut down the city.”

The chair of the Environment Organization emphasized the effects of dirty diesel fumes on Covid patients when he said that power stations, cars, and trucks that used mazut fuel or diesel should not be allowed to contaminate city spaces because of the compounding effects of the air pollution on Covid patients.

Alireza Zali, the head of the Tehran Covid-19 Task Force, said that Tehran had remained an orange zone with 2,150 patients in hospital with the disease. “The towns of Varamin, Shamiranat, and Rey have conditions similar to those of Tehran,” he said.

More than 196,500 people have died of the novel #coronavirus in 478 cities checkered across all of Iran's 31 provinces, according to the Iranian opposition PMOI/MEK.

Comments from the dean of West Azerbaijan Medical Sciences University stated that there were 453 Iranians in the hospital with Covid-19, 153 of which were in ICU.

The dean of Golestan Medical Sciences University said: “Currently we have 450 patients hospitalized, of which 93 are in ICUs and 38 are under ventilators. During the past 24 hours, we have registered eight coronavirus deaths and the province remains registered as an orange zone.”

Mrs. Maryam Rajavi the President-elect of the National Council of Resistance of Iran (NCRI): Because of pollution, the people of Tehran and major Iranian cities cry out “we cannot breathe!” The mullahs waste the country’s wealth in anti-patriotic nuclear and missile projects and on the export of terrorism. By using Mazut, they bring death to the people of Iran.