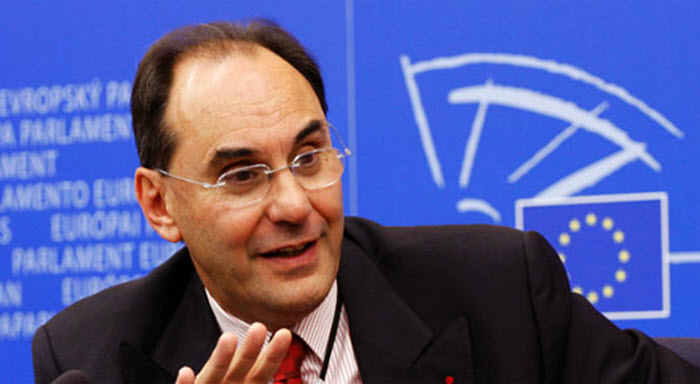 Alejo Vidal-Quadras, former vice-president of the European Parliament, spoke at the UN premises in Geneva on Wednesday 21st September. He called for an investigation into the 1988 massacre and the referral of its dossier to the Security Council. The full text of his speech can be found on the website of the National Council of Resistance or Iran (NCRI).

He said that at the end of his 15 years in the European Parliament he, along with some other colleagues, formed an NGO called the ISJ or International Committee In Search of Justice, a non-profit organization in Brussels. On 16th August ISJ produced a detailed report about the audio file of late Ayatollah Montazeri, the designated successor to Khomeini, the founder of the Islamic Republic.

“This audio tape is an important document and evidence of a crime against humanity in 1988 when more than 30,000 political prisoners, mostly affiliated to the main opposition PMOI, were executed by the order and fatwa of Khomeini. They were buried in mass graves and their families were unable to grieve for their loved ones,” he said.

The 40 minutes of conversation with the ‘death commission’ were recorded several days after the start of the massacre. Montazeri advised the executioners to put a halt to the killings and told them they would be remembered as the biggest criminals in history. They however tried to downplay the scale of the killings because Montazeri was still Khomeini’s successor.

Mr Vidal-Quadras continued: “It is interesting to note that one of those members of that Death Commission is the current Minister of Justice in the government of President Rouhani.”

Due to Montazeri’s opposition to that massacre, Khomeini dismissed him, and Montazeri paid a heavy price. Mr Vidal-Quadras explains that he was “humiliated and repressed by Khomeini and later by the current Supreme Leader Ayatollah Khamenei and was put on house arrest until his death in 1989.”

He also points out that the killing did not stop there. It still continues to this very day. Only last month, 25 Sunni prisoners were executed, for example.

Those who were in charge in 1988 are still in charge of the Islamic Republic of Iran today. They continue to supress and destruct all sectors of Iranian society. The current Justice Minister, Pour-Mohammadi, claims to be proud to have been involved in the massacre. “Bear in mind that this criminal is in the government of the so called “Moderate” Rouhani!” Mr Vidal-Quadras warns.

He adds: “The 1988 massacre of political prisoners in Iran is an example of both a crime against humanity and a genocide. Based on international conventions, neither crime against humanity nor genocide are expired with the passage of time. Therefore we have called for the 1988 massacre to be on the agenda of the current Human Rights Council. The UN High Commissioner for Human Rights must issue a call for an investigation in this regard.”

Mr Vidal-Quadras asks that the upcoming session of the General Assembly in New York in October issues a resolution and calls for an investigation into this massacre. Furthermore, the dossier should be referred to the Security Council. He also calls on the UN Security Council to form an international tribunal to examine this case and prosecute those responsible.

He ended his speech by asking everyone to “make sure that the brave resistance of those 30,000 political prisoners who were brutally hanged, will be remembered and that the criminals who are ruling Iran today will be prosecuted and brought to justice.” Finally, he urged western governments to condition their relationship with Iran to a suspension and halt of executions.