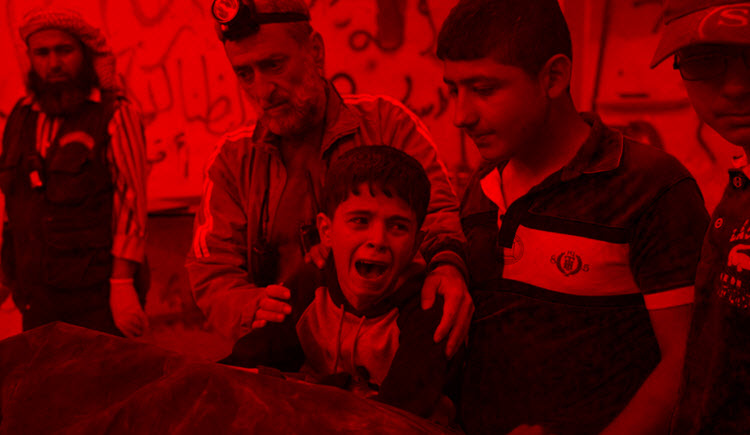 Civilians killed on spot as battle for Aleppo nears end

ALjazeera net reported on Tuesday December 13 that Pro-government forces have reportedly executed scores of civilians in Aleppo, including women and children, according to the UN, as the battle for Syria’s largest city nears its end.

Forces loyal to Bashar al-Assad have in some cases entered homes and killed those inside, and in others “caught and killed on the spot” fleeing civilians, Rupert Colville, UN rights office spokesman, said on Tuesday.He called the situation “a complete metldown of humanity”.

Colville said government forces on Monday killed 82 civilians – including 13 children and 11 women – in the neighbourhoods of Bustan al-Qasr, al-Kalleseh, al-Firdous and al-Salheen – taken over that day by government forces.

Fears have been growing for thousands of trapped civilians as rebels make a desperate last stand in their remaining pocket of territory in the former opposition stronghold of east Aleppo.

After weeks of heavy fighting, government forces were poised on Tuesday to take full control of Aleppo, dealing the biggest blow to Syria’s rebellion in more than five years of civil war.

The Syrian army said on Tuesday evening it could declare full control over east Aleppo “at any moment” as it advanced against rebels holed up in just a handful of neighbourhoods.

About 80,000 civilians are now trapped in the few square kilometres of east Aleppo that remain under opposition control.

In an alarming statement made on Tuesday, UNICEF said that nearly 100 unaccompanied children were trapped in a building under heavy attack in east Aleppo, citing an unnamed doctor in the city.

“According to alarming reports from a doctor in the city, many children, possibly more than 100, unaccompanied or separated from their families, are trapped in a building, under heavy attack in east Aleppo,” said Geert Cappelaere, UNICEF regional director.

Witnesses described scenes of carnage in previously opposition-held areas, with bodies lying amid the rubble of city streets, as desperate residents sat on pavements with nowhere to shelter.

“Our fate is sealed. Why would we hide, it won’t do us any good. We will either die or be captured,” said Ibrahim Abu al-Leith, a spokesman for the White Helmets rescue service.

Jan Egeland, UN special adviser for Syria,  said the last 24 hours have been the most dramatic so far in “the bloody, bitter, horrific battle for Aleppo”, and warned that those responsible would be held accountable for the bloodshed.

Lina al-Shami, an architect and well-known social media activist trapped in east Aleppo, says dozens of people are trapped in the rubble and that civil defence forces can do nothing to extract them.

“I know I may die or get arrested by this criminal regime, but I have to let the world know what is happening here in Aleppo,” she told Al Jazeera by Skype on Tuesday .

“We are facing genocide. There are people laying injured in the streets, still alive under the wreckage and civil defence can’t do anything to help them.”

“Don’t believe any more in United Nations … don’t believe anymore in the international community. They are satisfied that we are being killed, that we are facing … the most horrible massacre in [recent] history,” said Abdulkafi al-Hamdo, a well-known social media activist in east Aleppo.

Zeid Ra’ad al Hussein, the UN human rights chief, appealed on Tuesday to the international community to demand that Syria allow monitoring of its treatment of people fleeing eastern Aleppo.

He gave warning that populations of other opposition-held towns could face the same fate.

“The crushing of Aleppo, the immeasurably terrifying toll on its people, the bloodshed, the wanton slaughter of men, women and children, the destruction – and we are nowhere near the end of this cruel conflict,” Zeid said in a statement.

“What is happening with Aleppo could repeat itself in Douma, in Raqqa, in Idlib. We cannot let this continue.”

Syria’s army said it had taken 98 percent of the territory once held by opposition fighters in east Aleppo, after launching an all-out offensive last month to seize control of the entire city.

Scores of men who fled from the east to the west have been detained by the Syrian authorities and forced into military conscription, reports say.

The government assault has been backed by heavy artillery fire and air strikes, with at least 463 civilians, including 62 children, killed in east Aleppo since mid-November, according to the UK-based Syrian Observatory for Human Rights (SOHR).

Another 130 people including 40 children have been killed in western districts by opposition rocket fire.

Diplomatic efforts to end the conflict have repeatedly failed, and weekend talks between Russia and the US on a ceasefire to allow the evacuation of civilians made no breakthrough.

Russia is a key Assad ally and launched an air war in support of his forces last year, while the US and other Western nations have backed the opposition.

Turkey, which has also supported opposition forces in Syria, said Tuesday it would intensify talks with Russia on a ceasefire.

“Today, tomorrow, everyday, we will intensify our talks with Russia and other countries so we can find a solution to this humanitarian tragedy,” Mevlut Cavusoglu, Turkish foreign minister,  said.

“Our efforts continue in particular for civilians to be able to leave and for a ceasefire.”

The UN estimates that nearly 400,000 people have been killed since the Syrian conflict began in March 2011, and over half the population has been displaced