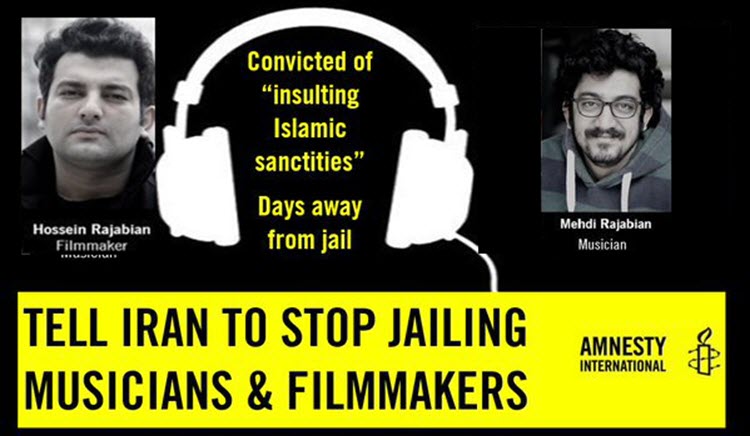 Amnesty International has launched a new campaign demanding the release of Iranian prisoners of conscience.

They have joined up with Iranian music band Kiosk on the #FreeArtists campaign and are encouraging other artists around the world to join in.

They are demanding the release of a musician and a filmmaker who are currently on hunger strike in Tehran’s Evin Prison.The brothers,

Philip Luther, Amnesty International’s Research and Advocacy Director for the Middle East and North Africa, said: “Expressing yourself through art is not a crime and it is outrageous that the Iranian authorities have resorted to locking up artists and musicians simply for their artistic work. Mehdi and Hossein Rajabian are prisoners of conscience who shouldn’t be forced to spend a single minute behind bars. The Iranian authorities must order their immediate and unconditional release.”

He continued: “Their imprisonment is yet another nail in the coffin for freedom of expression in Iran. The human right to liberty is sadly so undervalued by the Iranian authorities that they are prepared to condemn individuals to years in jail just to silence artistic voices that they deem as ‘anti-Islamic’ and ‘anti-revolutionary’.”

The brothers were convicted in a sham trial in 2015. They began their second hunger strike on October 28; they have also said that they will refuse intravenous drips.

Mehdi Rajabian has reported coughing up blood twice and even, been punched in the stomach by the prison doctor. Amnesty International wants the pair to be seen by a qualified doctor.

A third artist, Keywan Karimi, was sentenced to six years in prison for “insulting Islamic sanctities”.