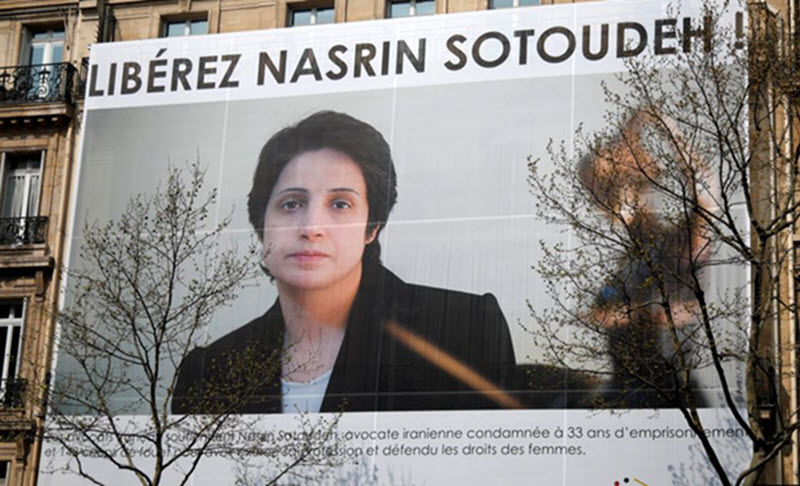 According to what Amnesty International announced this week, in more than 200 countries and territories around the world, at least a million people have come together to express their outrage at the sentencing of the prominent Iranian human rights lawyer. Signatures on petitions demanding her release were handed in to Iranian embassies around the world.

Amnesty International is organizing a global handover of the signatures collected, to mark one year since Ms. Sotoudeh’s arrest. Under Iran’s sentencing guidelines, she is due to serve 17 years in prison, but Amnesty is calling on Iranian authorities to release her immediately and unconditionally.

“The cruel sentence handed down to Nasrin Sotoudeh for defending women’s rights and standing up against Iran’s discriminatory and degrading forced veiling laws has sent shock waves around the world. The injustice of her case has touched the hearts of hundreds of thousands of people who, in a moving display of solidarity, have raised their voices to demand her freedom,” said Philip Luther, Research and Advocacy Director for the Middle East and North Africa at Amnesty International.

“We hope the support for Amnesty International’s campaign shows Nasrin Sotoudeh that, despite having to face an agonizing ordeal, she is not alone. Her continued detention has exposed the depths of the Iranian authorities’ repression on an international stage. Today we are sending them a clear message: the world is watching and our campaign will continue until Nasrin Sotoudeh is free.”

Ms. Sotoudeh’s case represents the wider crackdown over the last few years to invalidate Iran’s civil society and silence those advocating for human rights in the country. Amnesty International is calling on the Iranian authorities to stop attacks on human rights defenders, including human rights lawyers and women’s rights defenders.

“This campaign demonstrates that, whether we are in Argentina, Cameroon, Japan, Pakistan or Spain, what unites us is our common humanity and we need to stand up against human rights violations wherever they are happening in the world,” said Philip Luther.

1,188,381 people had signed Amnesty International’s petition as of June 10th.