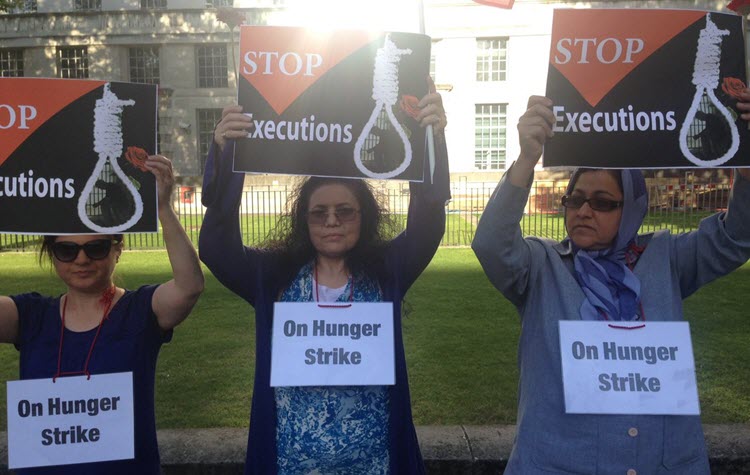 In an August 8 article by Imogen Calderwood for The Daily Mail, she reports on the protest this past weekend, when British Iranians were joined by a large group of supporters to protest the execution of up to 30 Sunni political prisoners in Iran on August 2.

Saturday morning protesters started a three-day ‘hunger strike’ outside Downing Street following the mass execution of prisoners in Iran. They are refusing to eat in an attempt to bring those they brand the ‘perpetrators’ of the killings to justice, and are urging the UK government and the UN to condemn hanging in the country, which carries out the second highest number of executions in the world.

On August 1, guards rounded up a number of death row prisoners. “Their hands and feet were chained, mouths shut with tape and heads covered with plastic bags,” reported the National Council of Resistance of Iran (NCRI).  The prisoners were then moved to an undisclosed location, and on Tuesday morning their families received phone calls telling them to be at the prison before 3pm to say their last goodbyes to their loved ones.

In an act of unmitigated cruelty, when they arrived they were told their relatives had already been hanged.  “We got on the road, but they called us on our way and told us not to go to prison, and to go to the morgue in Kahrizak instead,” a family member of executed 28-year-old Shahram Ahmadi told the New York-based International Campaign for Human Rights in Iran. “They called again to say that we should go directly to Behesht-e Zahra cemetery. They had executed him before we arrived. We were only able to get the body.”

The strike also marks the anniversary of the 1988 massacre of up to 30,000 prisoners across the country, many of whom were political prisoners.

Protester Ahmad Ebrahimi, 55, said, ‘This is very important for me. I was a political prisoner for 10 years and I know how it feels for the victims and their families. Their voices can’t get out from behind the walls of the prison. We’re here for them, it’s our responsibility.”  He added, “Nobody has taken action against this crime against humanity.”

Business graduate Naghmeh Rajabi, 29, said: ‘I’m doing this in solidarity with the political prisoners in Iran.”

Protester Zohreh Moalemi, 56, added: ‘We are here asking for action to be taken against this brutality, injustice and this crime against humanity. Enough is enough. It is something that has to be stopped.’

Conservative MP Dr Matthew Offord issued a statement to the NCRI, “The mass execution of Sunni political prisoners is deeply disturbing and has rightly been condemned,’ he said, and added, ‘We will continue to stand with you all and highlight your concerns in parliament.’

Iran’s intelligence ministry issued a statement on Wednesday saying “members of a Takfiri-Salafish group named ‘Monotheism and Jihad’ had been arrested and some sentenced to death.”

These claims are not verified.

Iranian state television broadcast what it claimed were the confessions of some members of the Sunni Muslim group before the executions, but activists and human rights groups claim the prisoners had been tortured.

Estimates point to some 2,400 people, including juveniles and women, executed in Iran in the past three years.