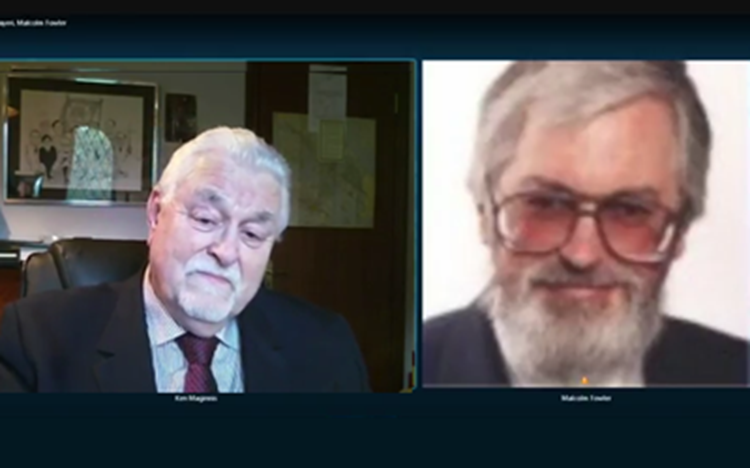 Two prominent figures from the UK participated in an online conference on Wednesday to talk about the human rights situation in Iran and the recent revelations about the mullahs’ involvement in the 1988 massacre of political prisoners in 1988.

Lord Maginnis of Drumglass, member of the UK House of Lords, and Malcolm Fowler, a former member of the Human Rights Committee of the Law Society of England and Wales, said that the leaked audio recording is proof that the mullahs’ regime was involved in the massacre. They both called on the UK government to commission an inquiry into it.

The audio recording of a meeting between the late Hossein-Ali Montazeri, former heir to the Iranian regime’s Supreme Leader Khomeini, and senior officials of the Iranian regime who were responsible for the massacre of 30,000 political prisoners during the summer of 1988, was leaked earlier this month. The majority of those killed during the massacre were activists of the main opposition group People’s Mojahedin Organization of Iran (PMOI or MEK).

The audio file was released on Montazeri’s official website on 9th August, and according to an article by the National Council of Resistance of Iran (NCRI), it “has spread like wildfire inside Iran”. Following the release of the recording, “the regime’s security forces summoned Montazeri’s son and ordered him to take the file down from the website”.

In the audio file, Montazeri said: “In my opinion, the greatest crime committed in the Islamic Republic … for which history will condemn us, is being committed by you. In the future your (names) will be etched in the annals of history as criminals.”

Lord Maginnis said that the 3,000 executions that have taken place in Iran in the past 3 years is just a “continuation of the 1988 massacre”. He expressed his regret that the UK does not have a moral policy towards Iran, but he said he hoped the new Prime Minister would take a “more principled stance”.

He said: “So long as Iran is treated as a trading partner and we focus on financial gains, the executions in that country will continue. The UK’s policy must focus on the plight of the Iranian people.”

Mr. Fowler said the massacre is “an injustice of historic proportions” and a “clear violation of international law”. He said that lawyers have a “responsibility to help bring the perpetrators to face justice, especially in light of Montazeri’s new revelations”.

He added: “The massacre of political prisoners in Iran in 1988 is unacceptable under international law. Prisoners were executed for vague crimes like waging war against God. The trials were a joke, there was no due process … [this] even runs contrary to the conventions that the Iranian regime has ratified. We must pursue this crime from every avenue.”

Mr. Fowler said that Khamenei’s participation in the 1988 massacre shows the real character of the regime. He said that further atrocities the regime has committed must be exposed.

Mr. Fowler said: “There must be an investigation by the UK government into the 1988 massacre in Iran. [From a judicial point of view] the end result should be the referral of those responsible to the International Tribunals and it must be tried, even if some countries in the UN Security Council are expected to cause problems by vetoing such efforts. A draft indictment should be sent to the International Criminal Court to this end as many of the perpetrators are known … what has happened in 1988 massacre in Iran, was wrong yesterday, is wrong today and will not be justified.”

Jim Fitzpatrick from the UK House of Commons agreed and said that there should be an enquiry because someone needs to be held responsible for all the deaths.

Speaking about his concerns with the Iranian regime, Lord Maginnis said that Iran is “involved in atrocities all over the region” and is involved in attacks against Camp Liberty. “We must create a new attitude to help the Iranian people, who have endured so much. At the end it is down to us to pressure the government and the Prime Minister to not compromise on Iranian people’s plight for financial gains”, he said.