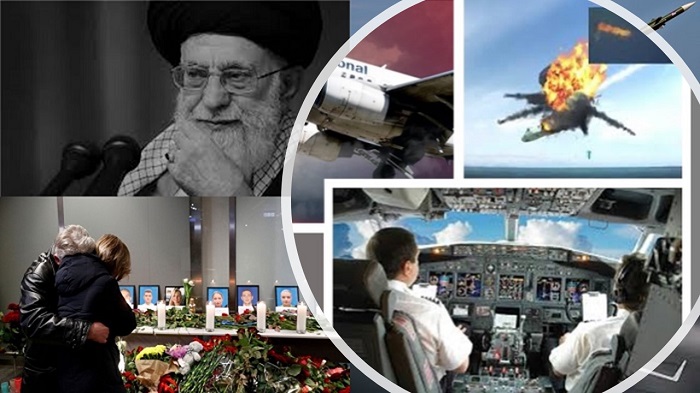 The National Council of Resistance of Iran (NCRI) and the  People’s Mojahedin Organization of Iran (PMOI / MEK Iran) reported that following the crash the regime denied being involved and even went as far as blaming Boeing.

To begin with, it didn’t want to share the information from the black box and in fact, this information was withheld for several months. On January 11th, the General Staff of the Armed Forces chose to admit that it was Iran’s fault but blamed “human error,” which sparked several days of protests.

Touraj Dehghani Zangeneh, the head of the regime’s Civil Aviation Organization, said that the cockpit’s black box kept recording the pilot’s conversation for 19 seconds following the 1st strike and at that time both engines were running. This meant that lives could have been saved if the 2nd missile attack hadn’t taken place.

On January 8, 2020, IRGC shot down a Ukrainian passenger jet just minutes after it had taken off from Tehran airport, killing all 176 people on board. #Iran claimed that it was a 'human error,' but no one has ever been brought to trial.#ps752justice https://t.co/KUpcDkRec5

In December 2020, the Association of the Families of the Victims claimed in a statement that the regime had put pressure on the families before the anniversary because it wanted the whole incident covered up. In fact, there is some evidence that shows the regime was prepared to offer bribes of $150,000 taken from the country’s annual budget.

Javad Soleimani, whose wife, Elnaz Nabii, died, said that victims’ families were called to the Ministry of Intelligence and then threatened with sexual assault, while the father of student Maryam Malek said that the regime had stolen the victims’ personal effects.

The families haven’t given up their fight for justice. They know the key perpetrator is the IGRC and they want these people to face the justice system which means prosecution for their unforgivable crimes, not compensation.

The Iranian Resistance, the National Council of Resistance of Iran (NCRI), and the  People’s Mojahedin Organization of Iran (PMOI / MEK Iran) said: “the deliberate shooting down of the aircraft and killing of innocent human beings is indeed an example of crime against humanity.

The people of Iran, particularly the families of the victims, will never forgive or forget this horrendous crime. They will continue to seek justice for the innocent victims.”

On January 7th, the families visited the airport and the crash site in Shahedshahr village to commemorate the victims. To begin with, the State Security Force tried to prevent this but the families resisted.

One Year After #Iran Downed Ukrainian Jet, Still No Justice, While Families Of Victims Are Harassed and Intimidated.#HumanRights | #Ukraine | #HRWhttps://t.co/55Emq3hgdP

Iranian students said, “We believe that seeking justice for the perpetrators of this crime, is the biggest and most glorious tribute to the victims and their families.”