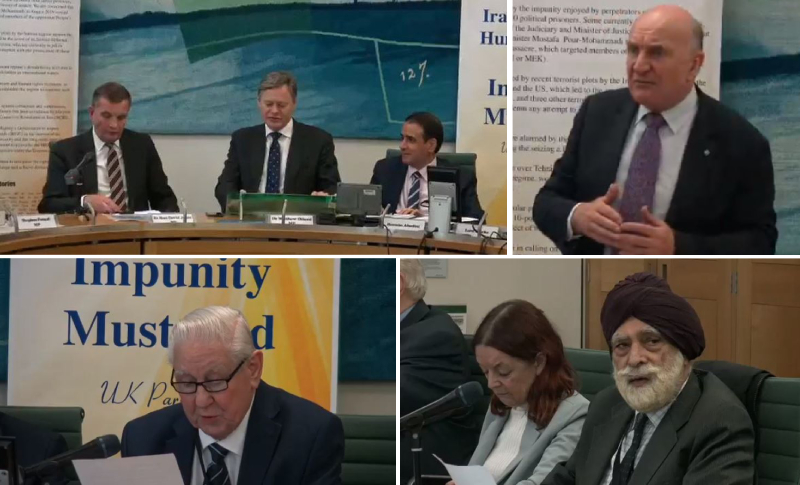 The leader of the Iranian Resistance, Mrs. Maryam Rajavi, sent a message to the parliamentary event, reminding those in attendance that the Iranian regime is continuing to violate human rights and carry out arbitrary executions. She said that the policies of appeasement from the West and the silence of the governments are allowing the Iranian regime to pursue its current behavior.

To change the policy of appeasement, I am counting on you, the honorable representatives of the people of Britain. #Iran #NoImpunity4Mullahs https://t.co/NCI3oDgXAm pic.twitter.com/a8cshZ8OcP

However, the most prominent speeches came from those offering first-hand testimony regarding the 1988 massacre in Iran in which more than 30,000 political prisoners were executed during the course of one summer.

Dr. Matthew Offord MP said that the British government must react to the regime’s escalation of aggressions and said that appeasement must stop. He advised that the government proscribes both the notorious Islamic Revolutionary Guard Corps (IRGC) and the MOIS intelligence ministry as terrorist entities.

Dr. Offord also called on the government to support the opposition’s movement. He said: “We should be supporting the democratic aspirations of the Iranian people, especially the NCRI and the ten-point plan of madam Maryam Rajavi. The UK’s only true ally in Iran is the people of Iran, not some moderate faction that the UK government believes exists in the regime. The NCRI is a viable alternative to the Iranian regime.”

The people of Iran have been struggling under the despotic rule of the mullahs for four decades. Their human rights have been stripped away from them and they are being denied the most basic of freedoms.

For the past couple of years, the Resistance movement inside the country has been growing and the people are courageously risking everything to stand in the street and call the regime out for its belligerence and corruption.

Years ago, it would have been quite unheard of for groups of Iranians to take to the street and openly call for regime change or chant “Death to the Supreme Leader”.

However, the Iranians have realized that the responsibility is largely their own. The international community has failed to address Iran’s human rights abuses. Human rights organizations and the opposition to the Iranian regime have called on governments to stop ignoring the issue.