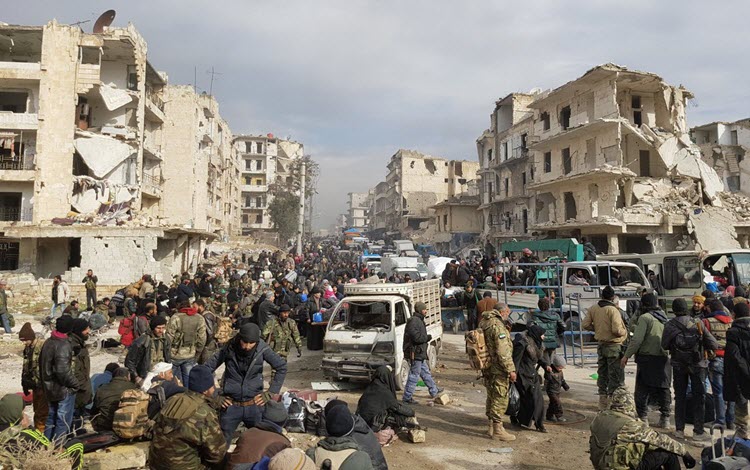 As forces loyal to Bashar al-Assad overrun Aleppo, social media is making the carnage obvious, so politicians in the West cannot claim to be ignorant about the atrocities that were committed there.  There has been footage of Syrian children running for cover, mothers crying for their loved ones, indiscriminate bombings.

The biggest surprise, perhaps, has been the response from the West, which seems to be complete indifference. The fall of Aleppo will go down in history as the shame of global policymakers.

In an article by Giulio Terzi, former foreign minister of Italy and a member of United Against Nuclear Iran’s Advisory Board published on December 15 in Newsweek, he writes,  “The moderate and pro-democracy rebel groups have effectively lost one of their main strongholds. It is important to note, however, that they have not surrendered their cause. Spokespersons for the rebels have defiantly insisted that their demands remain.”

The dismissal of the Assad government is only part of what they demand. They also want foreign influence, chiefly that of the Islamic Republic of Iran, removed from their country.

If we are to learn from what happened, it is important to remember that in the first months of this nearly six-year war, the rebel opposition made great strides and Assad seemed to be close to being forced from power. Terzi writes, “In a direct competition between popular discontent and government repression, popular discontent wins.”

But, trouble began for the anti-Assad movement when his foreign allies began to get involved in the conflict, arming and resupplying pro-government forces and send assistance in the form of the Iranian Revolutionary Guards Corps (IRGC),Hezbollah and other Shiite militant groups, and mercenaries recruited by Iran from Afghani and Pakistani refugee communities.

However, the real turning point was when Russia began a campaign of bombings that focused on the rebels, instead of ISIS militants.

According to Terzi, “It was Iran that convinced Russia to join the conflict, and thus it was Iran that chiefly orchestrated Assad’s victories. Shortly before the Russian bombing began, Qassem Suleimani, the head of the Iranian Revolutionary Guards’ (IRGC) Quds Force, visited Moscow to discuss plans for the future of Syria.”  He adds, “Suleimani’s trip was an outright violation of United Nations resolutions, as he had been banned from international travel due to his well known support for and participation in terrorist activities. Yet neither he nor his handlers in Tehran, nor his Russian hosts faced any consequences for this disregard of international law, as Western powers feared jeopardizing the nuclear deal. Western lack of interest gave Tehran and Moscow a carte blanche for the massacre of defenseless Syrians.”

The National Council of Resistance of Iran, (NCRI), presided over by Maryam Rajavi, revealed the center of the Iranian regime’s activity, Fort Behuth, 35 kilometers southeast of Aleppo, long before was overrun by pro-Assad forces.

That Fort Behuth included separate command centers for the IRGC and for Hezbollah, that it contained specific sections for a number of different militant proxy groups, and that soldiers and officers of the Syrian military were also present at the base, was all part of the NCRI’s report, which was significant as a snapshot of the forces “carrying out systematic crimes against humanity in conquered territory.”

Syrian civilians have reached Western audiences via social media, documenting horrific accounts of executions, including those of women, minors, doctors, among many others.

“It is horrifying to think that anyone in the free, democratic nations of Europe and North America could stand by and let this happen, but that is what we have all been doing,” Terzi says, and adds, “This is made worse by the fact that direct intervention may never have been necessary if we had simply taken appropriate measures to prevent the meddling of the Iranian regime.”

We turned a blind eye to the legacy of international terrorism when we ignored Suleimani’s visit to Moscow,  as well as Iran’s participation in the conflict. We endorsed the export of the Islamic Republic’s record on human rights, when we kept silent.

Terzi writes, “Indifference and inaction only embolden the perpetrators.”

An estimated 30,000 political prisoners, most of them  activists of the People’s Mojahedin Organization of Iran (MEK), were massacred in Iran during the summer of 1988. The was no reaction by the West at that time. Now, many of the Iranian participants in that atrocity are the masterminds of the atrocities in Aleppo.

While it’s too late for Aleppo, Terzi says “it is still possible to make it clear to Tehran that it will face serious financial and political consequences for its nefarious role in Syria.”  He believes that, “It is still possible to return the conflict to its original state as a conflict between the popular will of the Syrian people and the isolated dictatorship in Damascus.”

He credits the visibility of the atrocities in Aleppo, saying that it creates an opportunity for the international community to “stop Tehran and Moscow by demanding action from the International Criminal Court and war crimes tribunal.” Terzi states that civil organizations, dignitaries and NGOs make these demands immediately, and shatter the silence we will be judged by through history.