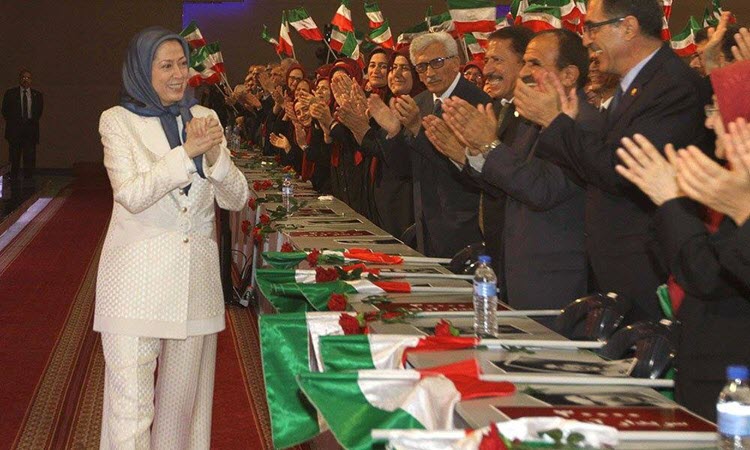 To mark the anniversary of the 1988 massacre that resulted in the killing of more than 30,000 political prisoners, a ceremony was held in Tirana, Albania’s capital city. As well as a large number of PMOI (MEK) members, there were also political and human rights dignitaries in attendance.

The President-elect of the Iranian Resistance, Mrs. Maryam Rajavi, spoke about the justice movement that is calling for an inquiry into the massacre. She called on the UN Human Rights Council and the UN High Commissioner for Human Rights to start an investigation into this crime against humanity and said that the perpetrators of the crime must be held responsible because some are currently high officials in the Iranian regime.

Mrs. Rajavi pointed out that the approach of the international community to this crime will be a way to see how universal human rights are treated. She added that officials of the Iranian regime have admitted to the crime.

The growth of this movement for justice for the PMOI (MEK) victims is a major blow to the Iranian regime that is already swamped with crises. It is starting to realise that it does not have impunity to kill and that the people of Iran will not let the massacre pass without justice.

Mrs. Rajavi spoke about a new publication entitled “Crime Against Humanity” in which details about over 5,000 PMOI (MEK) martyrs are given. She added that because of the work of the Resistance, we now know more about the victims of the massacre, most of whom were PMOI (MEK) members. In addition to this, we also have more details about the criminals who participated in the killings and the mass graves where bodies were hidden.

Senator Ingrid Betancourt compared the cruelty of the Supreme Leader’s fatwa to kill political prisoners in Iran to Hitler’s final solution. She said: “The very frightening part of this story is that we have all the information, all the names, all the documents, the proofs; we have the witnesses; we have the survivors, you. We have the testimonies; we even have the confessions of those who perpetrated those crimes. We have it all but we still have impunity.”

Ms. Kerry Kennedy reminded the audience that the PMOI (MEK) is trying to establish a government “based on humanity, not on suffering and oppression, but on compassion and love for one another”. She reaffirmed her support to the cause and said that the PMOI (MEK) is not alone. “And in that, all the world is with you. And I am proud to stand here with you, today. We are here today because we believe in freedom and we stand in solidarity with the people of Iran. We stand against the mullahs who have caused untold terror in your beloved country.”

Mr.  Rabino spoke about the injustices people in Iran are faced with every day and highlighted that President Rouhani was left with no choice but to replace Mostafa Pour-Mohammadi because of international pressure, but said that he was replaced with another member of the Death Committee – Alireza Avaie. He said that he wants the EU and European governments to prioritise human rights and to ensure that the perpetrators of the crime face trial at the international court in The Hague.

He said: “So, I hope that we will be able to extend our mandate JVMI (Justice for the Victims of the 1988 Massacre in Iran) to cover also the crimes committed in Ashraf and Liberty. And we also need to work very hard to bring those who committed these crimes to justice. It is feasible; it is reachable and we must do it.”