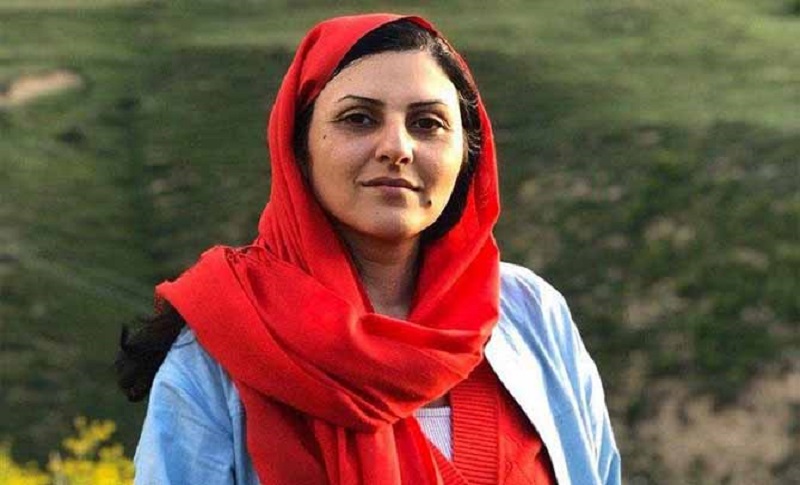 Gorokh Ebrahimi Iraee, an Iranian civil rights activist was arrested at her home on Saturday November 9, 2019. She is the wife of political prisoner Arash Sadeghi who suffers from cancer in Prison and was campaigning on Twitter for Arash’s release and access to medical aid.

On June 18, 2019 the regime’s Tehran Revolutionary Court examined a new case filed against Golrokh Ebrahimi Iraee and Atena Daemi for protesting against the executions of three Kurdish dissidents. Security agents raided Golrokh Iraee’s house and took her into custody.

Iraee and Daemi sentenced each to three years and seven months in prison for “insulting the supreme leader” (two years and one month) and “propaganda against the state” (one year and six months) by Judge Iman Afshari of Branch 26 of the Revolutionary Court in mid-July 2019.

Urgent: Former political prisoner Golrokh Ebrahimi Iraee is rearrested
She was arrested at home by 10 male security forces and taken to an unknown location. The security forces did not show their warrant for arrest.#Iran https://t.co/eOrRq28YvH pic.twitter.com/YtauqPvN4Z

According to human rights group Iran Human Rights Monitor (Iran HRM), Amir Raissian, lawyer of Golrokh Ebrahimi Iraee announced on September 5, 2019, that the same verdict had been upheld in the revision stage without being further examined.

Golrokh Ebrahimi Iraee was first arrested by the regime’s Islamic Revolutionary Guards Corps (IRGC) intelligence division on September 6, 2014, along with her husband and two other activists. She was held for three weeks in the IRGC Intelligence Ward 2A in Evin Prison and subsequently released on September 27, 2014, on an 800 million rial bail for her activities on Facebook. She was later sentenced to six years’ imprisonment on charges of “insulting sanctities” and “propaganda against the state.”

On October 24, 2016, her residence was stormed by security forces and she was taken to Evin Prison to serve her sentence. Her husband, Arash Sadeghi, went on a hunger strike in protest, and after 72 days, Golrokh Ebrahimi Iraee was released on January 3, 2017.

On January 22, 2017, Golrokh Ebrahimi Iraee was arrested again as she was heading to the hospital where her imprisoned husband was supposed to be examined.

Iraee was released on bail in April 2019 after serving three and a half years of a six-year prison sentence primarily for writing an unpublished story about stoning in Iran.

Her husband, civil rights activist Arash Sadeghi, has been serving a 15-year prison sentence for peaceful political activities since 2016 and is in poor health following a cancer operation last year.