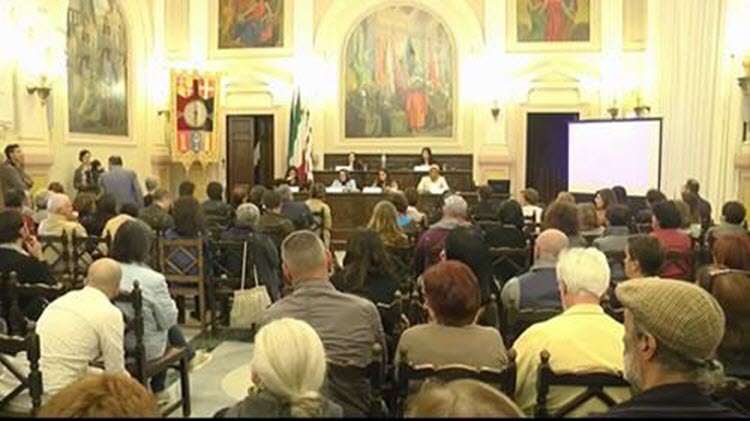 On November 7, as reported by the National Council of Resistance of Iran (NCRI), a conference was held in the main hall of the Central University of Sassari, in Italy, to commemorate the 30 thousand martyrs of the 1988 massacre in Iran, to support the “Justice Seeking Movement”, and to condemn the repression of women by the clerical regime of Iran.

The mayor of Sassari, the director of the Amnesty International, and Italian representatives participated in the conference. A delegation of the Iranian Resistance also attended and made a speech.

Dr. Virginia Pishbin opened the conference, and the guests and speakers were introduced.

The political-cultural advisor of Sassari’s Mayor, Raffaella Sau, welcomed the delegation of the Iranian Resistance and said, ”I want to express my gratitude to the Association of the Iranian youths in Italy for holding the conference. I also thank those who resist in order to attract the worldwide attention. I appreciate you for your activities which shape our public opinion against violence and genocide in your country.”

Elahe Arjmandi, a member of the Women’s Commission of NCRI, spoke about the Massacre of 1988, in which 30,000 political prisoners were executed under Khomeini’s Fatwa. She declared that that the Martyrs maintained their resistance at the gallows, and talked about the brutality of Khomeini and the death commissioners.  She emphasized on the role of that leaders still active in the regime played in the Massacre of 1988, as well as the current wave of executions. She stressed that these leaders will be tried, and this is what the Justice Seeking Movement advocates.

Elham Zanjani was the next speaker. She described the regime’s repression of women and stated that women’s role in Iran is to stand against the fundamentalism which has arisen from the system of ‘Velayat e Faqih’ (the Guardianship of the Islamic Jurist). Among the 120,000 martyrs of Iranian resistance, there were a significant number of women and girls who were the members of Peoples Mojahedin Organization of Iran (MEK/PMOI).  Despite suppression, the regime could not scare the youth off. They were inspired by the struggle of the women at the forefront of demonstrations and protests against the clerical regime.

Next, Dr. Stefania Fusco and Dr. Maria Cristina Carta discussed the misogynistic laws of the regime, and the suppression of women in Iran as a fundamental basis of the clerical regime. They pledged their support to the Justice Seeking Movement and stressed on the necessity of bringing justice to the perpetrators of the Massacre of 1988.

Mr Nicola Sanna, the mayor of Sassari, was the last speaker. Appreciating that the conference which was held in honor of the martyrs of freedom, he said, ”I congratulate the ladies who participated in this conference since the president of the Iranian Resistance is a woman and this contains a significant concept and message. The women lead the resistance at the national and international levels and they are the actual champions of freedom and democracy.”  He continued, “We and our city are on the side of the freedom fighters and the revolutionaries. We welcome the delegation of the Iranian Resistance and we support their struggle for freedom and democracy.”

Dr. Virginia Pishbin read a statement condemning the Massacre of 1988, and all participants signed the statement at the end of the conference.