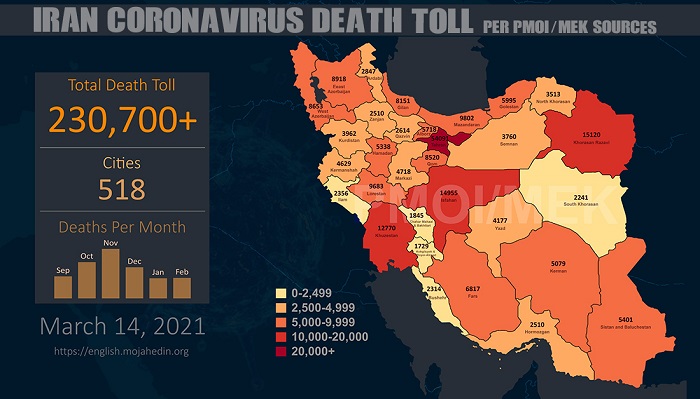 The National Council of Resistance of Iran (NCRI), and the People’s Mujahedin of Iran (PMOI / MEK Iran), reported that the coronavirus death toll in 518 cities surpasses 230,700.

According to reports tallied by the Iranian resistance The National Council of Resistance of Iran (NCRI), and the People’s Mujahedin of Iran (PMOI / MEK Iran), as of Saturday, 13 March, over 230,700 people have died as a result of the coronavirus in 518 cities spread across Iran. The regime’s official death toll is 61,142, which is about a third of the actual figure.

According to state-run news agency IRNA, a spokesperson for the National Coronavirus Combat Taskforce (NCCT) announced that “the mutated Coronavirus has been identified and is spreading in 28 provinces,” Hassan Rouhani brazenly claimed that “apart from Khuzestan, which even there, some parts of the Province did fairly well, thank God, all other provinces are in good condition!”

A member of the Scientific Committee of the National Coronavirus Combat Taskforce (NCCT): We are far behind in vaccination. We did not import the right amount of vaccines. The vaccination plan has failed.

Ahvaz University of Medical Sciences spokesperson said: The highest number of daily Coronavirus deaths in the past three weeks was 33 in Khuzestan Province. During the first week of March, 199 people have died of Coronavirus in the Province.