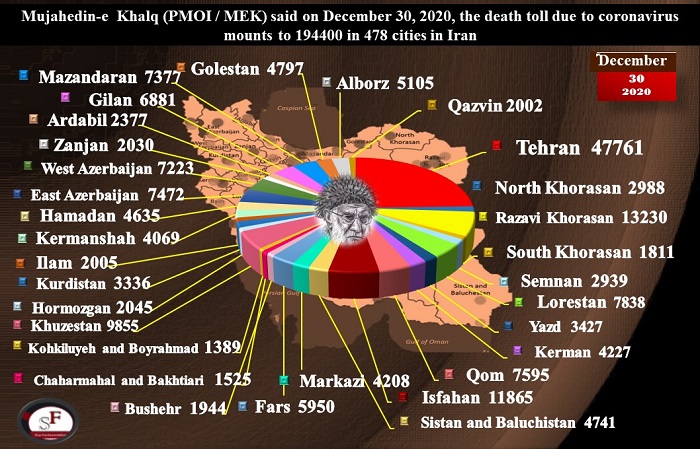 More than 194,400 people have lost their lives due to COVID-19, which has spread to 478 cities in Iran, reported by the National Council of Resistance of Iran (NCRI) and the  People’s Mojahedin Organization of Iran (PMOI / MEK Iran).

More than 194,400 people have died of the novel #coronavirus in 478 cities checkered across all of Iran's 31 provinces, according to the Iranian opposition PMOI/MEK.

Hassan Rouhani, after a few days of lying about the domestic vaccine: no one knows how many months it will take to produce the vaccine.

Hamid-Reza Jamshidi Secretary of the National COVID-19 Combat Taskforce (NCCT): “We are doing scientific work (that requires) trial and error. We hope to see the same test results in humans as we saw in animals. The date of mass production of the COVID-19 vaccine cannot be predicted. We hope to reach the semi-industrial production point in the next six or seven months.” (Eghtesad online, December 30, 2020)

Over 194,400 people have died of the novel #coronavirus in 478 cities checkered across all of #Iran’s 31 provinces, according to reports tallied by the Iranian opposition PMOI/MEK as of Wednesday afternoon local time, December 30.https://t.co/Iu36PWeOeN

Shiraz University of Medical Sciences: 3,011 people have died since the beginning of the COVID-19 outbreak in Fars, of which 1,444 are from Shiraz. (Mehr news agency, December 30, 2020)

The human test of the Iranian COVID-19 vaccine was carried out while a few days ago, 167 pharmacists dismissed the production of the COVID-19 vaccine as “just a joke.” They wrote: “How dare we claim the ability to produce such a vaccine?” (Hamdeli daily, December 30, 2020)

Mrs. Maryam Rajavi the President-elect of the National Council of Resistance of Iran (NCRI): As the regime’s foot-dragging in purchasing the vaccine has angered the public in Iran, the regime’s leaders continue to cover-up the truth and lie.

The mullahs’ president, Hassan Rouhani, says domestic and foreign vaccines are on the way, but the head of the Central Bank says only 200 million Euros have been allocated for 8.4 million people, i.e. one-tenth of the population.

The regime provides no details on when and where the vaccine is purchased. Rouhani sheds crocodile tears: “We are not prepared to let our people go through the testing period of an unreliable vaccine” and the head of the Red Crescent reveals: “The purchased vaccines are Chinese.