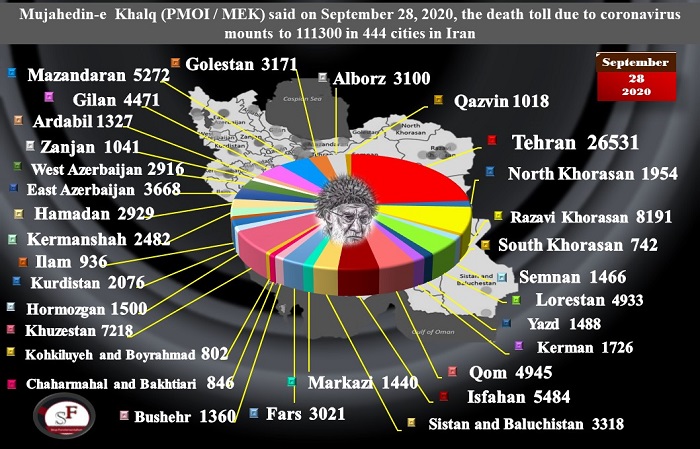 There is no sign whatsoever that the Covid-19 epidemic is anywhere near being suppressed in Iran as the death toll, as reported by the Iranian opposition People’s Mojahedin Organization of Iran (PMOI / MEK Iran), is now well over 113,000 across the country, despite the regime’s own doctored figures showing that it is only 25,779.

More than 111,300 people have died of the novel #coronavirus in 444 cities checkered across all of Iran's 31 provinces, according to the Iranian opposition PMOI/MEK.

The death toll in certain selected Iranian provinces is as follows:

The number of available beds available for COVID patients is very limited, according to a senior member of the Tehran Covid-19 Task Force. These patients cannot be accommodated anywhere else in a hospital because of the risk of them infecting many others.

“The number of dire patients and those who need to be transferred to ICUs have increased. They have reached the 35 percent mark in some hospitals. This has made managing the status quo exceedingly difficult. However, the main threat indicator is the number of patients that have been placed in the emergency section and are waiting to be transferred to ordinary branches.

Over 111,300 people have died of the novel #coronavirus in 444 cities checkered across all of #Iran’s 31 provinces, according to reports tallied by the Iranian opposition PMOI/MEK as of Monday afternoon local time, September 28.https://t.co/nSuGX5mDkE

This is an alarm bell because each day 600 to 700 people are being hospitalized in Tehran and the number of those released is low because the patients are in dire conditions,” said a senior member of the Tehran-based Covid-19 Task Force yesterday.

The dean of Tehran Medical Sciences University said that there was no such thing as a “wave” of infection. The epidemic experienced in Iran was a continuous event, he said to the Fars news agency.

The governor of Eslamshahr said that there was an increase in the number of people sick from contracting Covid-19 in the city. “Furthermore, the peak of this virus during the fall season has yet to begin,” he said. Far fewer students were attending schools because of the danger of contracting the disease, according to the Education Ministry’s own city head.

Medical personnel in Kerman province, south-central Iran, have reported that the hospitals in the province are overflowing with Covid-19 patients. All the ICU beds are already full to capacity. Even medical staff members were getting infected. There were shortages in PPE equipment, such as N95 masks. Ventilators and many other items needed to combat Covid-19 were in short supply across the province.

A health official in Razavi Khorasan province said that the fact that school-age children were contracting the virus was under-reported, meaning that there was no firm evidence whether the kids were getting infected at school or somewhere else.

The ISNA news agency reported that the situation was more serious than it was in March and requested that more restrictions were introduced. Educational institutions should be shut down for a couple of weeks to stem the spread of the virus, according to the Covid-19 Task Force, the news agency reported. “The situation in Qazvin is past code-red. We have no empty beds. Currently, we must hospitalize new patients in the hallways of hospitals. We are in the process of building field hospitals for special patients.”

There were 739 patients in the hospital in Qom, of which 123 were in ICU, according to the dean of Qom Medical Sciences University. The Coronavirus task Force reported very similar numbers in Western Azerbaijan.

Coronavirus, an ally for the regime

Mrs. Maryam Rajavi the President-elect of the National Council of Resistance of Iran’s (NCRI): It is hard to believe that Khamenei and Rouhani are deliberately sending people to their deaths by exposing them to the coronavirus. But they have in fact adopted the strategy of causing mass human casualties to protect their regime from the Iranian people’s protests and from the danger of being overthrown.