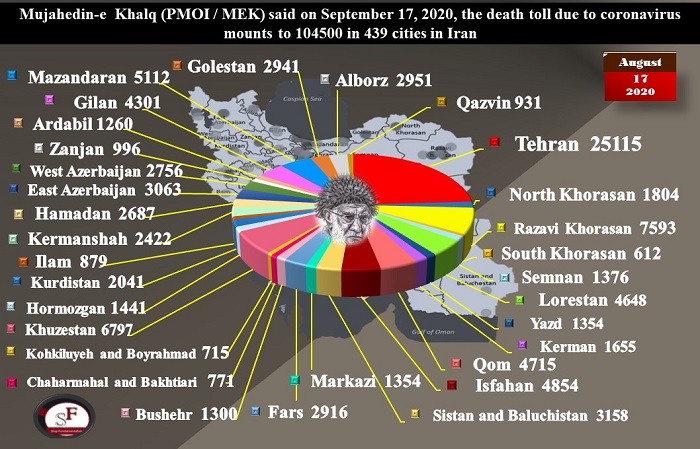 According to the report from The People’s Mojahedin Organization of Iran (PMOI / MEK Iran), COVID-19 has already killed 104,500 people in Iran. However, the regime’s death toll stands at just 23,808.

The People’s Mojahedin Organization of Iran (PMOI/#MEK) announced on Thursday, September 17, 2020, that the #Coronavirus death toll in 439 cities across #Iran had risen above 104,500. #COVID19 https://t.co/bZY5flrchT

The breakdown for the different provinces is the following:

More than 104,500 people have died of the novel #coronavirus in 439 cities checkered across all of Iran's 31 provinces, according to the Iranian opposition PMOI/MEK.

However, on top of this information, is that released by the regime’s Health Ministry, which said there had been 179 deaths in the last 24 hours. This is the highest number in the last 35 days.

The health minister also announced that the whole country stands in the red zone. The Deputy Health Minister, Iraj Harirchi, also said there was no safe place left in the country. In his announcement, he said no gathering is immune from getting the virus, whether it is a school community, a wedding, a recreational activity, or the mourning of a lost loved one. So far he said only 15 percent of families had sent their children back to school.

The deputy chief of Tehran’s Masih Daneshvari Hospital said a third wave of the virus was taking hold as the numbers seeking emergency treatment more than doubled in the last week.

Isfahan Medical Sciences University treatment manager said the situation of COVID-19 was devastating since mid-July. Throughout the province, there are 1,100 hospitalized patients. Those who tested positive for the virus out of 2,700 people 938 were from Isfahan.

The Qom Medical Sciences University dean said recently “The third wave of coronavirus has begun and the number of hospitalized patients has increased in comparison to the second wave. We will not allow any congregations and events in Qom anymore……… We request the health ministry to not abandon Qom with COVID-infected children and to only hold classes online. In the past week, those now hospitalized patients who are positive COVID-19 cases are the newest group of infections.”

Alborz Medical Science University caretaker said, “In the past weeks, the number of daily new hospitalized was between 60 and 70, but in the past 24 hours, this figure has reached 104 and six people have lost their lives.”

The rising number of coronavirus cases before the outbreak of the flu epidemic in Autumn is a product of the criminal policies of Khamenei and Rouhani.

The regime’s criminal rulers in Iran on the one hand order the schools to open without having the minimum hygienic and preventive preparations, and on the other, sanction religious gatherings in the month of Muharram.

The tragic coronavirus pandemic has cast a dark shadow over our nation for the past seven months. Khamenei, Rouhani, and the gangs ruling our country do not spend even a small portion of the hundreds of billions of dollars they have usurped from our nation.