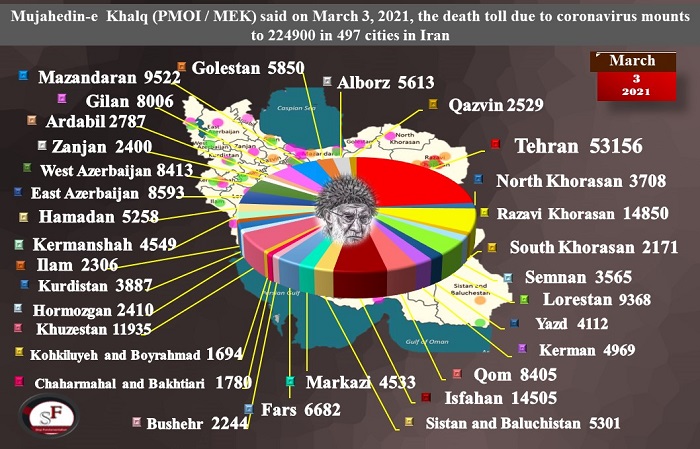 The Iranian main opposition (NCRI) and (PMOI/MEK) announced on March 3, 2021, that the coronavirus death toll in 497 cities across Iran had surpassed 224,900.

The number of victims in various parts of Iran

Karaj, west of Tehran, #Iran
Chamran Hospital#COVID19 patients are placed in seven large halls in this hospital & the situation is reported as very dire.

The lady is heard saying there is literally no control & family members are told to take care of the patients themselves. pic.twitter.com/YSp0KZK97c

“The work of the officials during this year has been nothing but making contradictory claims.

There was a dispute over the death toll between the city council and the Health Ministry. Then had these disputes over where to get the vaccines.

The government of Hassan Rohani ordered the Pfizer vaccines and then it had to cancel it …. Once the Health Minister says that he is doing nothing but managing mortuaries, the next week he claims that the world is amazed at the management and control of the coronavirus in our country.

In February, an 80% decrease in death toll and infections is reported, but two weeks after and as we approach the Iranian new year (Nowruz) it increases!

The mullah’s authorities sometimes blame each other for inadequacies.

One says that the culprits are those who left the Iraqi borders open for the British virus to enter the country.

Others say that you are to blame for not being able to quarantine Ahvaz.

However, in the end, everything is blamed on the people because it is alleged that they did not follow the protocols, causing the fourth outbreak.”

Mullahs regime’s Health Minister Saeed Namaki, said: Khuzestan Province has the highest number of infections. Out of 70 intubation coronavirus patients in Khuzestan, 30 died in one day. And if we have 3-4 other provinces like Khuzestan and things get out of control, it will create a disaster.

Khuzestan Red Crescent managing director said that the situation in the Province is critical. We must be prepared for any situation.

The spokesperson for the National Coronavirus Combat Taskforce (NCCT), Alireza Reisi said that the behavior of the British coronavirus is quite unprecedented.

He predicting that the situation in the next month is not an easy task. In the past two days, more than 30% of the deaths were related to Khuzestan.

University of Medical Sciences South Khorasan announced that the number of coronavirus patients admitted to ICU has increased by 33% compared to the previous day.