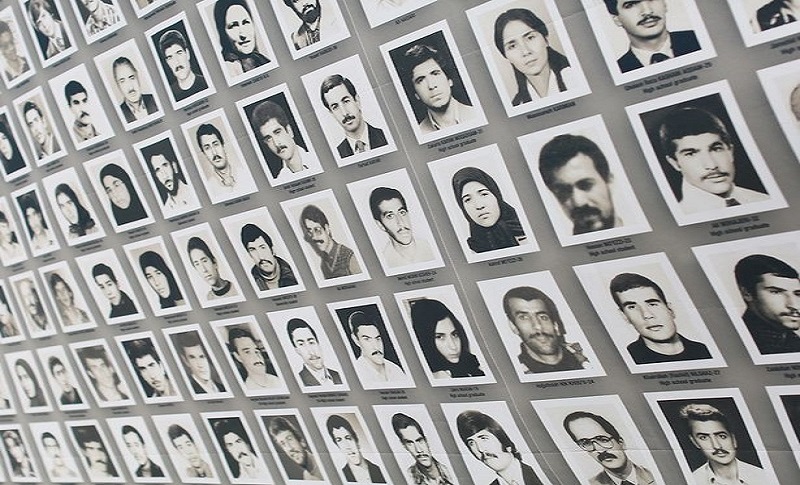 British paper Daily Star has published shocking new details about the 1988 massacre of 30,000 political prisoners in Iran, mostly members, and sympathizers of the People’s Mojahedin Organization of Iran (PMOI, Mujahedin-e Khalq or MEK). Daily Star also explained that the victims were hanged or shot, dozens at a time, then their corpses were thrown dumped into unmarked mass graves around the country.

The November 12 online report explained that a new book by MEK and presented in conference by Mrs. Maryam Rajavi, President-elect of the National Council of Resistance of Iran (NCRI). This book has gone into detail about the so-called Death Commissions that sent thousands to their deaths after show trials that allowed no time for a defense.

Daily Star Online wrote: “The book Crime Against Humanity names 5,015 of the victims, has eyewitness accounts of the massacre, and names the members of the regime responsible.”

No one has ever been brought to justice over the massacre of MEK supporters and members yet, many have been promoted. Three Death Commission members who currently hold senior positions in the Regime and were identified by NCRI sources are:

head of the Iranian judiciary Ebrahim Raisi, who led arrests, torture, and executions during the massacre

judicial advisor Mostafa Pourmohammadi, who gave death sentences to all prisoners in Tehran and Karaj

justice minister Alireza Avai, who was one of the leading prosecutors involved in the slaughter

Iran has long tried to cover up the massacre, ordered by regime founder Ruhollah Khomeini, even imprisoning or executing those who speak up about it or ask questions about relatives who essentially went missing from those prisons. Anyone who talks about the massacre is accused of being a threat to national security.

Eyewitnesses talk about the horror of the massacre, with 33 people at a time hung from cranes in “execution yards” and the victims replaced every half-hour, with truckloads of bodies being removed and dumped every day. This went on for two weeks straight.

In another account, a factory assembly hall was turned into a killing floor for the political prisoners held in Gohardasht prison. Groups of 10-15 blindfolded prisoners would be led, hands-tied, to a stage and a noose, suspended from the high ceiling would be placed around their necks. The prison governor would kick each prisoner, in turn, to throw them off the stage and hang them.

One eyewitness explained that sometimes the fall would not kill the prisoners and they would still be alive when it came time to replace them with the next prisoners. Then, the guards would grab the prisoner’s feet and pull them down to kill them. Unbelievably, they were the lucky ones.

Iran’s 1988 massacre of 30,000 political prisoners is an “ongoing crime against humanity”. 31 years on, the perpetrators are in government & families of victims continue to be tormented. It’s high time for @UNHumanRights to investigate the #1988Massacre.https://t.co/kewzyevVYM pic.twitter.com/wrlDs8gOZM

The eyewitness said: “In several cases when they lowered the body, they noticed that the victim was still alive.
[The prison governor] would say ‘no problem’ and would order the guards to bring the next batch of prisoners on the stage. The victim would be taken to mass graves along with other corpses and buried alive.”

Maryam Rajavi, the president-elect of the NCRI, told the Daily Star: “Western governments and the United Nations turned a blind eye on this crime. Having enjoyed impunity for such a horrible crime, the regime emboldened to spread its crimes to the Middle East, which is still ongoing. They turned Syria into a blood bath and fuelled the war in Yemen. In recent months, the mullahs and their Revolutionary Guards struck at vessels in international waters, and at oil installations and airports in their neighboring countries. Clearly, they do so because they do not confront any firmness.”

She added: “The dossier of the massacre of political prisoners must be referred to the UN Security Council and international courts, and perpetrators would face justice.”