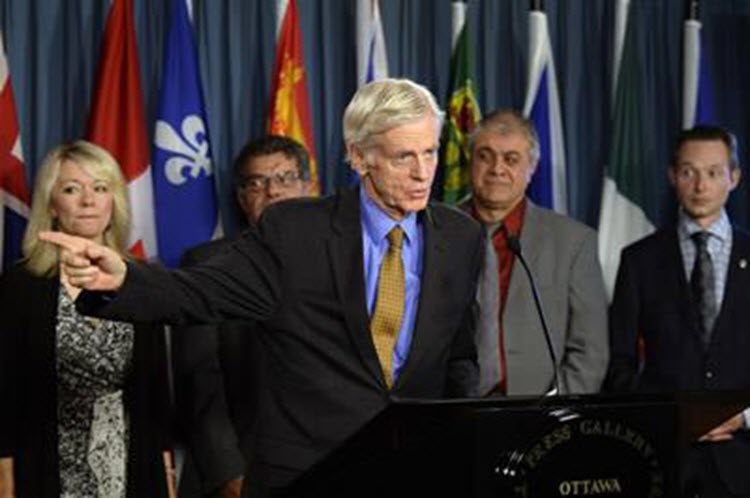 David Kilgour, former member of Canada’s House of Commons and Secretary of State, said that the Canadian House of Commons is “one of few parliaments in the world to have formally acknowledged and denounced one of the worst crimes against humanity in recent history”.

In 1988, around 30,000 political prisoners were murdered following a fatwa issued by Ayatollah Khomeini. Most of these people were activists of the opposition People’s Mojahedin Organization of Iran (PMOI/MEK). It was not just adult men that were executed, Kilgour points out. It was also pregnant women and minors as young as 15, he said.

Kilgour points out that the international community is aware of these statistics, but chooses to not act. He said that although people are aware of the number of executions carried out, it does not necessarily understand the extent of the regime’s brutality.

He calls on other parliaments to adopt resolutions such as Canada’s, which “condemns the mass murder of political prisoners in Iran in the summer of 1988 as constituting crimes against humanity”.

“Although it took Canada 25 years to acknowledge formally the 1988massacre and to express ongoing solidarity with Iranian political prisoners, every Canadian citizen and policymaker can be proud that their country is ahead of the curve when it comes to recognizing the emergence of new information about the Islamic Republic. As the catalogue of such information continues to expand and reach a wider range of countries, Canada has earned a unique opportunity to help guide international policy in more intelligent and realistic directions with regard to Iran’s human rights abuses.”

The audio recording of Ayatollah Hossein-Ali Montazeri’s condemnation of the massacre has drawn more attention to the atrocity. Kilgour said: “More governments and legislators will receive domestic and international requests to condemn formally the individual perpetrators, many of whom still hold power in Iran.”

He questioned: “How can any country which understands the 1988 massacre and the ongoing human rights crisis in Iran seek expanded relations with the fundamentalist theocracy?”

He said that demanding an inquiry into the 1988 massacre by the United Nations and pushing for the “surviving architects of the massacre to be charged with crimes against humanity” is an important first step.