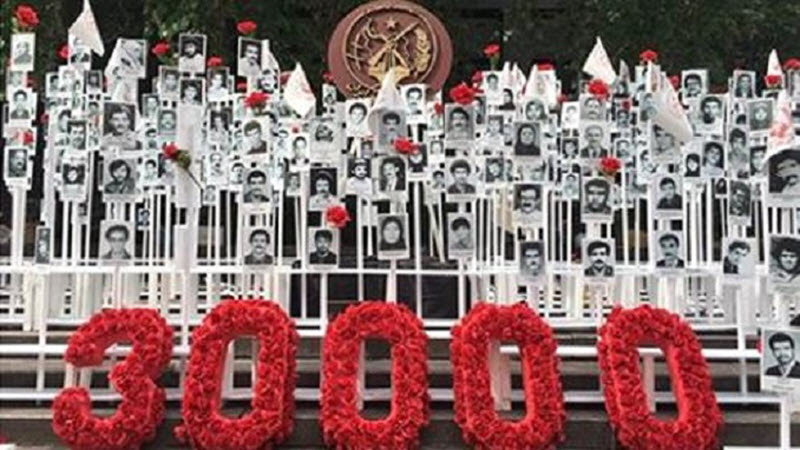 On March 7th, Ebrahim Raissi was officially appointed to head the judiciary of the regime by the Iranian Supreme Leader, Ali Khamenei.

Raissi is notorious among Iranians for his part in the Massacre of 1988, when some 30,000 political prisoners were executed. In fact, during the last presidential elections in 2017, popular reactions to his candidacy were so intense that Khamenei failed to implement what he calls “electoral genius” to bring his favorite to the head of the judiciary.

In 1979, when the Iranian Regime came to power, Ebrahim Raïssi, was only 18 years old. He was one of nearly 70 students from the Qom school, who were selected by Ayatollah Khomeini’s main lieutenant, to be trained for the new government. He earned an early position in the Prosecutor’s Office in the town of Masjed Soleiman in southwestern Iran, which was then a stronghold of groups opposing the newly born religious dictatorship.

Because Khamenei is aware that the name Raissi is synonymous with cruelty it is not surprising that he brought Raissi to head his justice system. In fact, some believe he intended to create a climate of terror curb the protests and strikes that have continued to plague the regime for more than a year in Iran. The regime is also fearful of the PMOI/MEK’s growing influence within the Iranian population.

Ali Ghassemian, an expert of the Iranian regime’s inner circle, wrote about his concerns the PMOI/MEK’s activities across the country in the state-run Vatane Emruz daily. “Today, the [PMOI/MEK] is attempting to make contact with our younger generation through social media platforms… They are guiding them to set billboards and signs on fire, hold images of [PMOI/MEK] while chanting against the state. They are calling this ‘Resistance Units.’”

The state-run Baharestaneh website, allied with the Supreme Leader, posted the following article on August 28th:

“It is necessary to take a look at the differences the PMOI/MEK have implemented in their tactics these days in comparison to the Dec/Jan uprising period. For some times now, the PMOI/MEK launched a coordinated chorus indicating the Islamic Republic of Iran is in its final phase. Cyberspace has the role of providing back-up fire in this regard… The PMOI/MEK have changed their tactics now and the protests, even in comparison to the Dec/Jan period, have surpassed an undeniable reality…

“It is worth taking the time and looking at the differences in the PMOI/MEK today in comparison to Dec/Jan:

1. In the past, the PMOI/MEK were known to ride waves. Today, however, they have infiltrated into many social sectors and among people from all walks of life, including truck drivers, bazaar store owners, people whose life savings have been stolen by state-run firms, teachers, workers and … and [PMOI/MEK] are guiding them in their protests.

2. The nature of today’s protests has changed. For example, in the past, it would take one or two days for social/economic chants to evolve into [anti-regime] slogans. Today, however, this transition is quickly turned into a political demonstration and slogans change into [anti-regime] chants.

3. During the Dec/Jan period the protesters were unorganized and lacked leadership. There were vivid leadership mistakes on the ground and the movement lacked the necessary complexity. Today, however, in addition to gaining a gangster-like and aggressive spirit, [the protests] have the potential of establishing bunkers and shields in the streets in the case of a faceoff with security forces. This means the protesters are far more ready these days.

4. Protesters, with the PMOI/MEK topping the list, lack any political reservations. They do not recognize any factional divisions inside the [Iranian regime] and they put the same amount of energy in their slogans against reformists as they do against principalists.

5. The PMOI/MEK’s role in the Dec/Jan uprising is so undeniable that the Supreme Leader said in his January 9th speech: ‘A triangle was active in this regard… The PMOI/MEK was the third side of this triangle. Currently, the fact that protesters are becoming organized is a game-changing factor in comparison to the Dec/Jan uprising. They have established entities dubbed ‘Resistance Units’ that are able to increase their numbers and have the potential of replacing leaders at the scene of protests [in case of arrests]! However, the most significant development is the linkage between these units to their leadership. Currently, these resistance units are receiving their guidance from Massoud Rajavi in the form of ‘Message to Resistance Units.’”

The website went on to say, “On August 2nd of this year, Massoud Rajavi sent a message titled, ‘Fist with a fist, attack with attack, fire with fire’ to lift the protesters’ spirits, promising them these protests will continue and expand with each passing day. He described the protests as more organized in comparison to the past, claiming the [regime] lacks the capacity to confront these measures.

“Now that the enemy of the state, with such an apparatus, has prepared for a confrontation, we must acknowledge the fact that we are all in the same boat. Therefore, one must tell all government officials and the associated others that the status quo is a very serious threat that one cannot easily neglect.”

This article, associated with Khamenei himself, highlights the situation in Iran’s regime. In the face of escalating protests across the country, especially with PMOI/MEK resistance units galvanizing and spearheading these efforts, the regime is ineffective. Historically, with societies who, like Iran, are on the verge of an explosion, deterrent actions often have the opposite effect to what was expected — they accelerate the explosion.