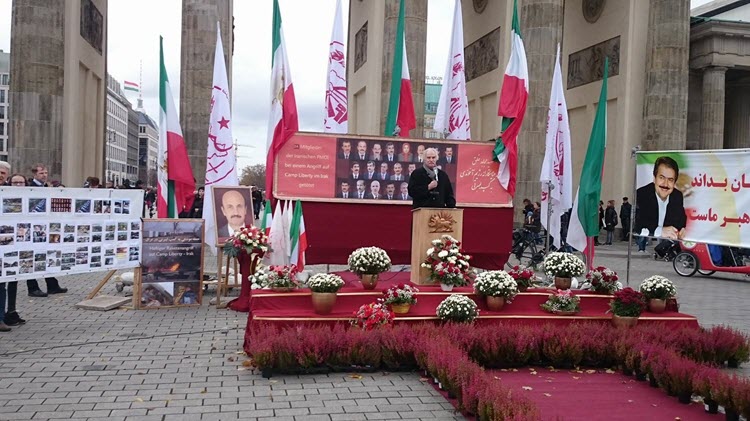 The National Council of Resistance of Iran published a story on October 31 about Christian Zimmermann, the Director of Human Rights and Minority affairs in Berlin, who attended a commemoration for the 24 members of PMOI/MEK killed in missiles attacks on Camp Liberty on October 29th, 2015.

“In these months, the German government wants to pass a law in order to coordinate the economic relations with the human rights; But what will happen then?”,  Mr. Zimmermann asked, referring to the cooperation of German authorities with Iran, and their policy of appeasement with the Iranian regime.

He stated,  ”Today, we commemorate the 24 members of PMOI/MEK whose pictures are behind me. They are only a small part of the thousands of people who have risen up against the religious dictatorship in Iran. They paid the price with their blood. On my right side, you will see the written figure of 30000.This figure is reminiscent of an incident in Iran.  In 1988, Khomeini ordered a Fatwa,” and he added,  “According to the order, 30 thousand prisoners were executed and secretly buried. Until today, we do not know where they are buried and the ‘fatwa of death’ is still valid.”

Mr. Zimmermann pointed out that, “The guilty of these crimes is a religious dictatorship that we are dealing with. According to the German constitution, we are allowed to have good relations with the countries that defend the values of the French Revolution such as freedom, democracy, and equality.”

He criticized the German ministers, Mr. Sigmar Gabriel the Vice Chancellor, Mr. Alexander Dobrindt the Minister of Transport, and the Minister of Foreign Affairs Frank-Walter Steinmeier, who, “travel to Iran to negotiate and sign a contract and yet they will not speak a word of human rights while the human rights should be a precondition for any talks with the Iranian authorities.”

“We need to stick to our moral values in the political arena. Now I ask my government to abolish the death penalty, as others do annually, and to impose a condition to respect the human rights in establishing relations and talks with Iran. This is the only way to start a conversation with them. We can only communicate on the same level provided that our common values of human rights are preserved. I cannot have a relationship with a country that executes 15 people each day. This is a disgrace and a shame for those who hold talks with such country,” Mr. Zimmermann concluded.