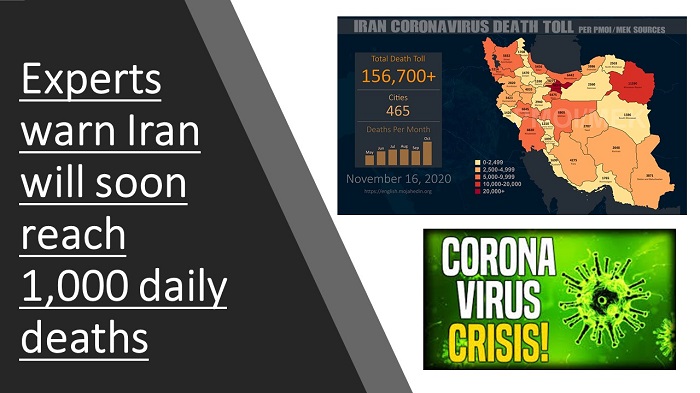 Countries across the world are still battling against the Coronavirus outbreak that has killed so many people. Western countries are reintroducing lockdowns as they experience new peaks in the epidemic.

Iran is one of the worst-affected countries. The opposition to the Iranian regime, the National Council of Resistance of Iran’s (NCRI) and the People’s Mojahedin Organization of Iran (PMOI / MEK Iran), has reported that (as of Monday afternoon) more than 156,700 people have died after contracting the virus in Iran. The regime’s figures stand at only 41,979 – a quarter of the figure reported by the (PMOI / MEK Iran) that has been monitoring the situation closely.

More than 38,241 people have died in Tehran alone with other provinces also seeing many thousands of deaths.

Speaking about reports of a lockdown in certain places, the council chief also said that the spokesperson for the National Coronavirus Task Force should be more transparent in this regard. He said that it is uncertain who in the task force is against a shutdown, reiterating that it is President Hassan Rouhani that has the final say on all matters.

More than 156,700 people have died of the novel #coronavirus in 465 cities checkered across all of Iran's 31 provinces, according to the Iranian opposition PMOI/MEK.

He said that there are many people who declare themselves as not being opposed to a lockdown, including Rouhani himself apparently, and a number of other officials and experts, yet a lockdown has still not been put in place.

A member of Tehran City Council also spoke about a lockdown saying that officials are in apparent agreement, yet nothing has happened. They questioned what the government’s limits are and how many people must die in Tehran before the city is shut down temporarily to slow the spread of the virus.

A Member of Parliament from Ferdows in the province of South Khorasan province said yesterday that the situation across the country is getting worse with every day that goes by. Majid Nasirayi said that his district is seeing cases that are several times more than the national average and that the province as a whole is facing a very critical situation. The MP also pointed out that the death rate in Iran is particularly high, highlighting that there is an average of 240 deaths per 10,000 cases across the world, yet in Iran, it is 500 – more than double the global average. He said: “The reason for this must be examined.”

More than 156,700 people have died of the novel #coronavirus in 465 cities checkered across all of #Iran's 31 provinces, according to the Iranian opposition PMOI/MEK. pic.twitter.com/s834JUjhMN

An epidemiology professor was quoted in a state-run publication saying that the number of cases and deaths in Iran is rapidly rising and that action must be taken now. They said that if no drastic action is taken now, the coming months will see a healthcare system that is completely overwhelmed.

The people of Iran have been left extremely vulnerable by the Iranian government that has no idea or willingness to deal with the health crisis. Its neglect and mismanagement are criminal.

We commemorate the physicians and nurses who lost their lives to provide care to the #Coronavirus patients.They risk their own lives while their basic rights have been trampled for years under the mullahs’ rule.All of us feel indebted to these selfless women & men #IND2020 #Iran pic.twitter.com/OvNDhY9fDM