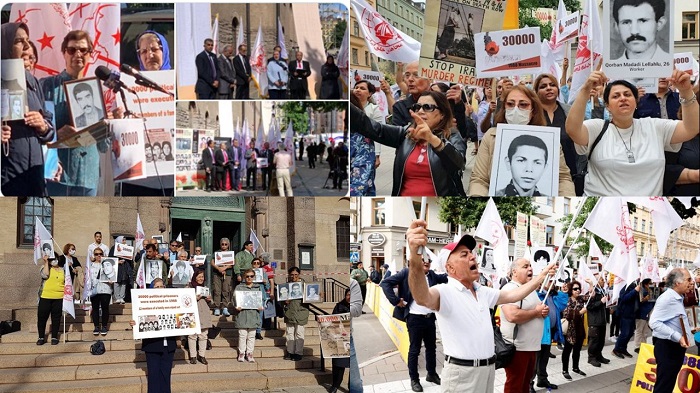 On Tuesday, the trial of Hamid Noury, a perpetrator of the 1988 killing of political prisoners, began in Stockholm, Sweden’s capital.

Hamid Noury was involved in the killings while working as an assistant to the deputy prosecutor in Karaj’s Gohardasht Prison. He was in charge of the assassination of a large number of persons. Several years ago, the Iranian Resistance designated him as one of the perpetrators of the 1988 massacre.

He spent several years as an interrogator and torturer in Tehran’s infamous Evin Prison as a member of the Iranian Revolutionary Guard Corps (IRGC). When Noury actively participated in the massacre of political prisoners in Karaj, west of Tehran, in 1988, he was sent to Gohardasht prison.

In response to Khomeini’s decree, ‘Death Commissions’ were organized in Tehran and across Iran. The inmates were brought before the Commission, where their destinies were decided in minutes. Political prisoners who refused to give up their beliefs were sentenced to death.

At least 30,000 political prisoners, the majority of whom were MEK members, were executed over the course of a few months.

Many of the victims had already served several years in prison and had even completed their terms but had not been released, and they were buried in hidden mass graves.

Almost all of Iran’s regime’s leaders and key officials were implicated in the killing. The criminals have had full impunity since then.

Transporting prisoners to the “Death Commission”

He was detained by Swedish officials on a visit to Sweden in November 2019. After a 21-month investigation, he was indicted on July 27, 2021.

According to the prosecution, Noury, in his capacity as assistant to the prosecutor or a comparable position, exhorted and directed others to participate in the mass execution of prisoners by supporting him and other officials in the operation.

Nouri’s role in the mass execution of prisoners

Although both counts allege involvement in unlawful executions, the distinction between war crimes and murder, in this case, is based on which organization a specific victim was affiliated with at the time, and more specifically, whether that organization was engaged in an armed conflict against the regime.

Witnesses of Noury’s actions testified in front of Swedish authorities

MEK members and sympathizers who witnessed Noury’s actions testified in front of Swedish authorities and provided sufficient evidence and recordings during the investigation. In Noury’s case, the MEK is represented by the bulk of the 35 plaintiffs.

The Iranian Resistance, most notably the MEK within Iran, has been leading a public campaign for victims’ justice in recent years. On September 3, 2020, seven UN Special Rapporteurs wrote to the Iranian government, noting that the extrajudicial murders and forced disappearances of thousands of political prisoners in 1988 “may amount to crimes against humanity. ” Should the dictatorship “continue to refuse to uphold its obligations under international human rights law,” the statement continues, “We call on the international community to take action to investigate the cases, including by establishing an international investigation.”