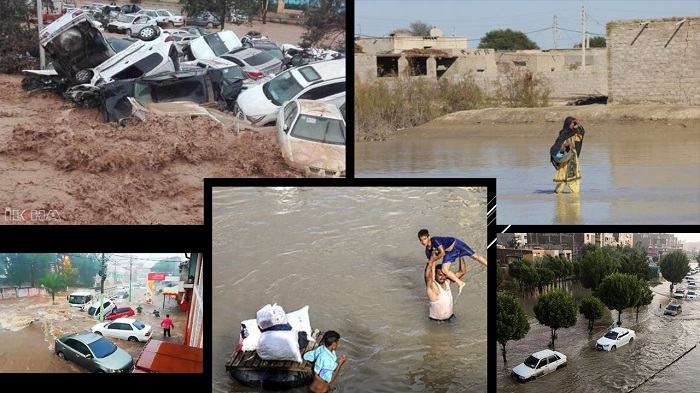 Supporters of the National Council of Resistance of Iran (NCRI) and the People’s Mojahedin Organization of Iran (PMOI / MEK Iran), reported from inside Iran that during the last few days, heavy rain and floods have affected Bushehr province. That led the officials of the mullahs’ regime to tell people not to travel anywhere. (PMOI / MEK Iran) supporters from Behbahan report that the roads from Deyam county to Behbahan and Hendijan, Borazjan to Genaveh, and Borazjan to Kazeroun are now flooded. On top of this high winds have caused the loss of power in Genaveh. Many homes and roads in Shabankareh and Vahdatiyeh counties have suffered damage due to the flooding event.

#IRANFLOOD ,March 26
Extreme rainfall in the N of Kazeroon ,Fars Province has begun. The severity of the rainfall is very high.
The risk of a severe flood is serious. pic.twitter.com/3x9Tes0usj

(PMOI / MEK Iran) supporters from Sarbandar report that to try to control the public who were furious about the lack of action on behalf of officials It suspended the Sarbandar mayor (Mohammad Abiyavi). It was last Saturday when people in Sarbandar staged a protest outside the Judiciary and Municipality and demanded that the incompetent city officials should resign due to their lack of action and leadership.

Dec. 5- Sarbandar, SW #Iran
Locals have gathered outside the Municipality, chanting against local officials they blame for the rainwater and sewer water that's still floating around in the city one week after seasonal rains turned into floods. #IranProtests pic.twitter.com/c0lCIqudSx

(PMOI / MEK Iran) supporters from Bushehr report that heavy flooding throughout the southern region did significant damage to Bushehr province. Esmail Ramezani, head of the Khuzestan Red Crescent said that after the heavy rain in eight provinces including Khuzestan water found its way into people’s homes in 15 provinces causing a large amount of damage.

Regime officials revealed that due to heavy flooding and persistent rain companies in Mahshahr’s Special Petrochemical Economic Area closed down. Reports submitted by the state-run daily Mardom Salari said that as these unfortunate incidents were taking place the public is outraged by the lack of inattention of officials to help alleviate the problems caused by these unusual rain events.

Locals blame the regime's mismanagement/corruption & are saying they haven't received any aid from authorities.

“In the last two years, Khuzestan province has experienced heavy rains and floods. During the winter and spring of 2018, the flood caused much damage to the villages of Khuzestan province, including Sousangerd,” wrote Mardom Salari. On December 5, the people of Mahshahr protested in front of the Governor’s Office and City Council, against the inaction of officials, regarding flood in the city.

Mrs. Maryam Rajavi, the President-elect of the National Council of Resistance of Iran (NCRI), expressed her deep sympathy with the Khuzestani people who face destructive floods. In a tweet, she stressed: “Mullahs’ destructive policies in wasting our nation’s wealth in unpatriotic nuclear, missile progs, the export of terror and war, made our people vulnerable to flood, earthquake, and COVID19.”

With sincerest sympathies to the oppressed people of #Khuzestan, who under the mullahs’ criminal rule, face calamities every day, whether #Coronavirus or destructive floods. Regime’s policy of plunder has exacerbated such natural disasters a hundred times.