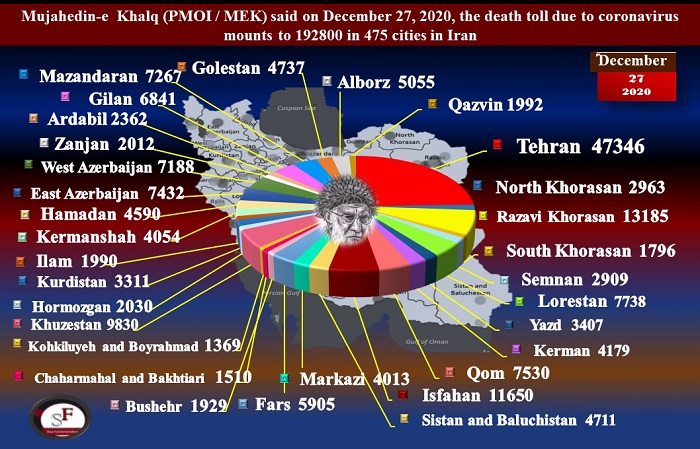 Reliable reports by the Iranian opposition, the National Council of Resistance of Iran (NCRI), and the  People’s Mojahedin Organization of Iran (PMOI / MEK Iran) as of December 27th, reveal that more than 192,800 people have died of COVID-19 throughout 475 cities covering Iran’s 31 provinces. The regime refuses to admit to the truth by stating that only 54,693 have lost their lives.

More than 192,800 people have died of the novel #coronavirus in 475 cities checkered across all of Iran's 31 provinces, according to the Iranian opposition PMOI/MEK.

The COVID-19 deaths by province

Iranians are becoming more and more bitter and angry because the regime has been so slow at buying a suitable vaccine in order to reduce the ever-increasing death toll.

Regime President, Hassan Rouhani, has tried to pretend that it doesn’t want to buy vaccines that may not be effective.

More than 192,800 people have died of the novel #coronavirus in 475 cities checkered across all of #Iran's 31 provinces, according to the Iranian opposition PMOI/MEK. pic.twitter.com/h5m0uoWSnh

Karim Hemmati, head of the regime’s Red Crescent, said that the Food and Drug Organization is responsible for checking the safety of any vaccines before they are put to use.

Sadegh Larijani, head of the regime’s Expediency Council, said on Sunday, according to the semi-official ILNA news agency, that he was concerned about being blacklisted by the FATF.

The head of the Tehran City Council Health Committee said on Sunday that something needs to be done quickly as everyone, including doctors and nurses, have suffered far too much in the last few months.

Even today 35,000 nurses are still providing medical care and almost 12,000 have contracted Covid-19 according to the senior official of the Greater Tehran Nursing Apparatus and reported by the semi-official ILNA news agency.

The dean of Sabzevar Medical Sciences University in Razavi Khorasan province said on Sunday that recently more and more victims are ending up in the hospital and it is getting so bad that it appears the country is heading for its 4th peak.

Kermanshah Medical Sciences University has reported that hospital admissions have doubled in the last 24 hours from Sunday according to the semi-official ISNA news agency.

The deputy dean of Mazandaran Medical Sciences University said on Saturday that he believed this sudden surge in cases could be related to a possible mutation of the virus.

The governor of Mazandaran province has asked the media to tell the public that Covid-19 cases are on the rise with1147 patients admitted to hospital, 233 of whom are seriously ill, according to a Sunday report issued by the semi-official ILNA news agency.

An article published on Sunday by the state-controlled Arman daily reported that if the officials cannot see the urgency of the situation the future will be unpredictable from now on and into the future.

It is getting to the point now that as the tears flow and despair sets in nothing will be left to do to solve the problems people are being faced with due to the virus.

Continuing their criminal policy since the #Coronavirus outbreak which has led to the deaths of at least 192,000 Iranians, Khamenei & Rouhani procrastinate the purchase of vaccines. This is a dirty game which will take its toll of the oppressed and the deprived.

Mrs. Maryam Rajavi is the President-elect of the National Council of Resistance of Iran’s (NCRI): Continuing their criminal policy since the coronavirus outbreak which has led to the deaths of at least 192,000 Iranians. Khamenei and Rouhani procrastinate the purchase of vaccines. This is a dirty game that will take its toll on the oppressed and the deprived.