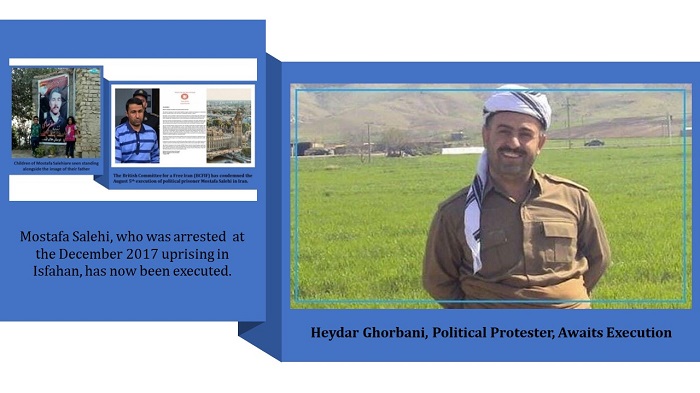 A report in Iran News by Matin Karim on behalf of the MEK announced that the Iranian regime’s Supreme Court has just endorsed the death sentence for Heydar Ghorbani, who comes from Kamyarana city in Kurdistan province.

The case has now been referred to the city of Sanandaj Prosecutor’s Office for the execution to take place.

The MEK has reported that Heydar Ghorbani was arrested in 2016 by agents of the regime’s Ministry of Intelligence and Security (MOIS). He was taken to Sanandaj Central Prison where he was subject to torture and now he has been transferred to death row.

They didn’t let me be with him for 5 years
Now they want to execute him@JavaidRehman
Heydar Ghorbani’s son speaks out#StopExecutionsInIran pic.twitter.com/xVQMtKS5uQ

Earlier in the year, the MEK reported that the regime had executed30-year-old Mostafa Salehi, 30 who was one of the many arrested in the December 2017 protests. He was sentenced to death and his charges were “leading the riots of Kahrizsang district in the city of Najafabad”. Before his sentencing, Salehi had many times denied the charges laid against him but was tortured to try and force a confession.

The MEK has said that the mullahs’ regime had imposed both crackdowns and executions to build a climate of fear amongst Iranians.

The Iranian Resistance is now pleading with the United Nations Secretary-General, High Commissioner for Human Rights, the Human Rights Council, and other international human rights organizations to take immediate action to save the life of the political prisoner, Heydar Ghorbani.

The MEK does not support the religious fascism that currently rules Iran and despises the use of torture and arbitrary executions of, in particular, political prisoners.

URGENT#Iran‘s regime is bound to execute political prisoner Haydar Ghorbani. Please raise your voice in the effort to help save his life.#DoNotExecuteHaydarGhorbani#StopExecutionsInIranhttps://t.co/0KseFIK6xa

The MEK has now reported what the Iranian regime’s state-run media announced on Wednesday, August 5th, that the political prisoner, Mostafa Salehi, who was arrested at the December 2017 uprising in Isfahan, has now been executed.

According to MEK reporters, many protesters who were arrested at December 2017 protest, their alleged crimes were exaggerated by the regime and reports suggesting that Mostafa was responsible for shooting someone else were fabricated to justify his execution.

#British Committee for a #FreeIran2020 (BCFIF) has condemned the August 5th execution of a political prisoner, Mostafa Salehi, in #Iran. Mr. Salehi was arrested after protests in Iran in January 2018.#NCRI #MEK #Iranian https://t.co/EwIf0Y728R via @stopfundamentalism pic.twitter.com/5LJup3H7lG

The regime of Iran is notoriously renowned for making up scenarios and extracting forced confessions. Mrs. Maryam Rajavi, the president-elect of the National Council of Resistance of Iran (NCRI), denounced the evil execution of Mostafa Salehi saying it took place to “terrorize the public and fend off popular upheavals.” Mrs. Rajavi is now asking the international community to denounce the executions and seek out ways to protect political prisoners.

The MEK reporter said that less than 2 weeks ago, a global twitter campaign involved the tweeting 12 million times of the hashtag #donotexecute, demanding that the death sentences for three youths who were arrested in November 2019 be withdrawn.

As a result of this global response, despite confirmation of the death sentences, the regime’s judiciary has not yet gone ahead with the executions of Amir Hossein Moradi, Saied Tamjidi, and Mohammad Rajabi. Amnesty International was the first organization to claim that the executions were unfair.

A report from MEK revealed that the regime’s notorious state security forces recognized and arrested 25-year-old Moradi by viewing CCTV footage accessed during the November 2019 protests. He was taken to Evin prison where he was both tortured and ill-treated, including being beaten and being subjected to electric shock treatment.

Late in July, the MEK reported that the families of five protesters who have been sentenced to death because they took part in the December 2017 / January 2018 uprising got together outside the Isfahan judiciary building to express their concern about the secret executions of their loved ones.