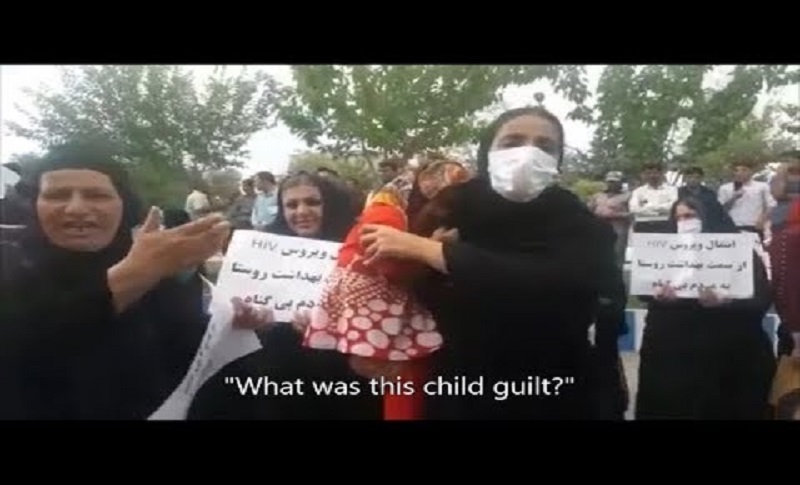 300 inhabitants of the Lordegan county in Charmahal & Bakhtiari province, southern Iran, became inflicted with AIDS due to negligence of Iranian officials in the regime’s Health Ministry.

Dozens of locals held a protest rally on Wednesday in the aftermath of this incident. The crowd, mostly women, gathered in front of the governor’s office and the Health Ministry branch in Lordegan.

The crisis started when reports surfaced that Health Ministry employees used infected syringes for blood sugar tests, resulting in the virus being transferred to many residents in the Chenar Mahmoud village.

“The Health Ministry came to our village for free blood sugar and insulin tests. The syringes they employed had already been used and were infected with a virus,” a villager said. “Now, after a few weeks, they’ve brought in a doctor from Tehran to test the residents and figure out the type of virus,” told the villager.

Another resident said, “Up to now, 500 inhabitants have been tested for HIV and they’re all affected. The Health Ministry is not shouldering any responsibility for anything. Officials are saying we did not distribute the syringes. Local authorities are not taking responsibility either and are blaming government health authorities.”

Roughly 66,000 people in Iran have HIV and almost half of them are unaware, according to estimates by the Iranian Regime, but as the Regime routinely underreports statistics that make the country look bad, it is likely this number is much higher.

For instance, in 2009, the World Health Organisation estimated that there are over 100,000 AIDS sufferers in Iran out of an 80 million population. HIV develops into AIDS over time, meaning that the number of HIV sufferers is likely much higher than 66,000.

Many within the Regime see this as the result of Iranian youth adopting a permissive Western lifestyle, such as accessing the internet and allowing couples to live together before getting married- a practice attacked by Mohammad Mohammadi Golpayegani, Supreme Leader Ayatollah Ali Khamenei’s chief of staff.

However, they neglect to mention that in the US, only 1 in 7 is unaware of their HIV positive status. The correct way to deal with HIV is through education (both sexual and medical) and prevention through the use of barrier contraceptives like condoms.

Homeira Fallahi, a senior advisor to the AIDS and sexually transmitted diseases department of the Health Ministry, said that the website hiv-sti.ir provides information about HIV and other sexually transmitted diseases (STD) and the locations of 157 centers that provide free, confidential, HIV tests and counseling services, including seven that offer services to juveniles, but more needs to be done.

With the mullahs cracking down on a free and fair internet for their citizens, how many Iranians can actually access this site?

Considering that the Iranian Regime’s health care system is extremely underfunded because the Regime plows its money into terrorism and warfare, how can they be trusted to treat all Iranians for HIV when the mullahs consider it a ‘Western Disease’?

The HIV problem under the Iranian Regime will only get worse, so long as the Regime remains in power.